WhatsApp for Android beta v2.21.2.2 has instances of the Read Later feature being in the pipeline. 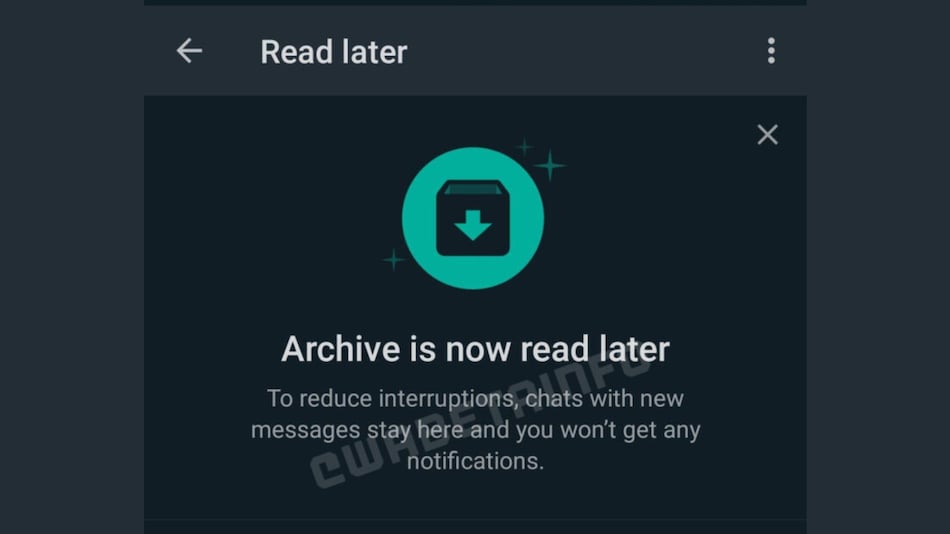 WhatsApp is reportedly working on a Read Later feature, that is essentially a rejig of what Archived Chats is right now. Read Later, as the name suggests, will keep all chats added to this list muted, and new message notifications for these chats won't be offered to reduce frequent interruptions. Essentially, users can put all those groups and individuals that aren't important to them in this Read Later section to have a less cluttered and organised main chat screen on WhatsApp.

WhatsApp features tracker WABetaInfo reported about the new Read Later feature. Improvements to this feature were spotted in Whatsapp Android beta. The new WhatsApp for Android beta v2.21.2.2 has instances of the Read Later feature being in the pipeline. In November, WhatsApp for iOS beta v2.20.130.16 also had mentions of this feature. Of course, it is under development and you won't be able to see it even if you install the latest beta. WhatsApp should introduce it to beta users once the feature is ready for testing, before making it available to all commercial users.

WABetaInfo says that Read Later will sit exactly in the same position as Archived Chats, on top of the chat list. Tapping on the button will offer an introductory banner that explains what it is about, “To reduce interruptions, chats with new messages stay here and you won't get any notifications.” The tracker notes that WhatsApp is working on improving this function, and the latest update brings a persistent message that will be plastered at the top of the Read Later for users to be aware what its functionality is. The message reads, “All chats are muted to reduce interruptions.”

User can reportedly easily turn off Read Later with just a toggle in Chat Settings. With this one switch, all chats that have been kept in Read Later will move to the main chat section. There is no clarity on when this feature will be available to all users.

Chris Evans to Return as Captain America? ‘News to Me,’ Evans Says