In last few weeks, WhatsApp has been tipped to be trying new features with the Status feature available in beta versions of the messaging app. Now, the latest information about a new WhatsApp for iPhone beta version suggests that users will gain the ability to upload pictures and video clips as their Status for a time period of 24 hours after which they will disappear, just like the Stories feature on Snapchat.

WABetaInfo, a WhatsApp beta watcher that has previously provided leaks regarding other changes to the app, has now suggested in a tweet that the messaging platform is looking to revamp the Status feature inside the app. Along with the text that says "Status introduction text updated in WhatsApp beta for iOS 2.17.4+," WABetaInfo uploaded a screenshot of the updated feature on iOS with new introduction. 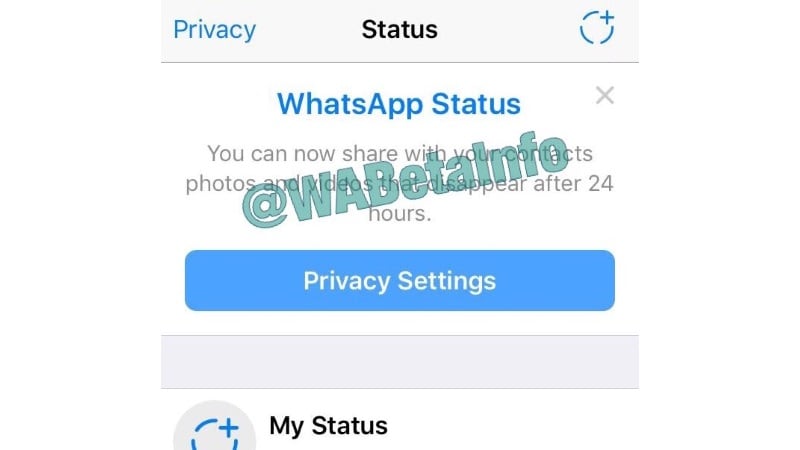 Interestingly, the leaked image suggests that WhatsApp will provide privacy options meant specifically for Status put up by users to provide them with more control over who can see their pictures and videos. Previously, another WhatsApp for iPhone beta leak suggested that the app may soon start providing notifications to users whenever their friends change their Status, as well as the ability to delete a Status in 24 hours.

Separately, WABetaInfo earlier and it said that users will also be able to reply to the Statuses and have conversations, as done in Snapchat, as seen in the WhatsApp beta for Windows Phone 2.17.40+ version.

Further, it has been suggested that WhatsApp might introduce a feature that allows users to share their live location with a specified audience for a brief time or indefinitely, as per their preference.

On Android, the app has been tipped to get a separate tab for Statuses, joining the existing Chats, Calls, and Contacts tab.