WhatsApp May Soon Inform You If Friends Change Status Messages

WhatsApp users on Android devices and iPhones may soon get new features to allow their friends to track their location live as well as get notifications when friends change their status messages. These features may be in the works for the app, as beta versions of the apps for the two mobile software according to WABetaInfo, which keeps track of changes in the WhatsApp beta builds.

WABetaInfo has shared screenshots of the location-sharing feature, said to be from beta version of the app for Android and iPhone. The option to share your location with friends in a group chat is shown to be working on WhatsApp beta versions 2.17.3.28 for iPhone and 2.16.399 for Android. There's a new 'Show My Friends' option that makes your live location accessible to the specified audience for a few minutes or indefinitely - whatever your preference might be.

WhatsApp for Android Could Soon Let You Recall, Edit Messages After Sending Them

The tipster also claims that WhatsApp is also working on a feature that notifies users when one of their contacts changes their status message. There are a lot of improvements coming for the WhatsApp Status feature, most notably the push notification, and the ability to delete the status in 24 hours. The Android app is tipped to get a separate tab for Statuses, joining the existing Chats, Calls, and Contacts tab. WABetaInfo also informs that Group messaging will get many tweaks in the coming days. 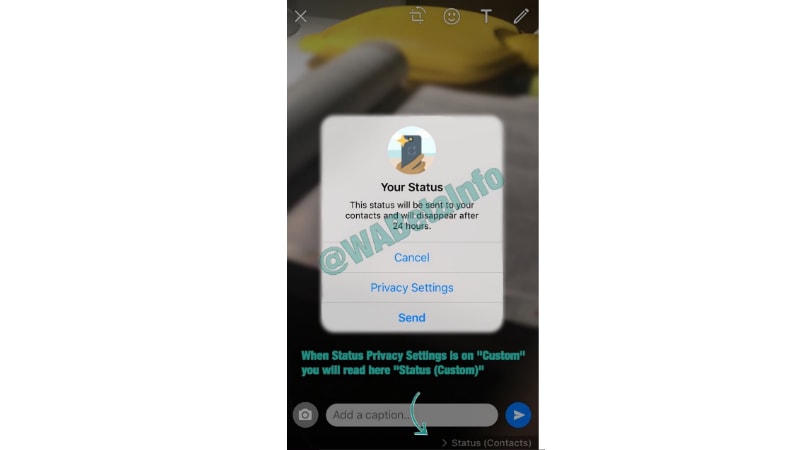 Apart from the live location feature, the app's beta version 2.17.3.28 for iOS is pegged to bring the ability to save photos from WhatsApp into a separate folder in the camera roll by default. There's a new 'Contact Us' action button that could presumably let you send feedback to the developers directly. WhatsApp has also added the ability to send a notification to a user when he is running out of battery during live call.

WhatsApp recently rolled out a big stable update for iPhone users introducing an increased limit of sharing media to users to 30 files. Furthermore, iPhone users recently got the ability to queue messages as well, something that Android users have been enjoying for a while.

Further reading: WhatsApp, WhatsApp for iOS, WhatsApp for Android, Apps, Social, Live location, WhatsApp Status, Android, Apple
Tasneem Akolawala Email Tasneem Tasneem Akolawala is a Senior Reporter for Gadgets 360. Her reporting expertise encompasses smartphones, wearables, apps, social media, and the overall tech industry. She reports out of Mumbai, and also writes about the ups and downs in the Indian telecom sector. Tasneem can be reached on Twitter at @MuteRiot, and leads, tips, and releases can be sent to tasneema@ndtv.com. More
Snap Said to Reveal Financials Within a Week, Ahead of Upcoming IPO
Moto G5 Said to Clear FCC Ahead of MWC 2017 Launch, 3000mAh Battery Spotted