After bringing support for the iPhone XS Max and testing a 'Vacation Mode', WhatsApp is reportedly set to bolster its presence on iPhone by bringing Touch ID and Face ID support. The new development is said to currently be in a "high alpha stage". Nevertheless, some screenshots evidencing Touch ID and Face ID support on WhatsApp for iPhone have already surfaced on the Web. The WhatsApp Business app for iPhone is also reported to come with authentication support, but it is unclear that when will the instant messaging app bring fingerprint support natively for Android devices.

Folks at WABetaInfo are reporting that WhatsApp is currently developing Touch ID and Face ID support for its iPhone app. The new development is said to be in the pipeline for some weeks under a high alpha stage. Having said that, there are some screenshots to suggest the scope of new support.

The alleged screenshots posted on the WABetaInfo website show that the rumoured option to enable Touch ID or Face ID on a compatible iPhone is available under the Privacy settings of WhatsApp. It essentially prompts users to use Touch ID or Face ID each time to access the instant messaging app. Further, if the app doesn't recognise the assigned biometrics, it will ask users to enter their iPhone passcode. 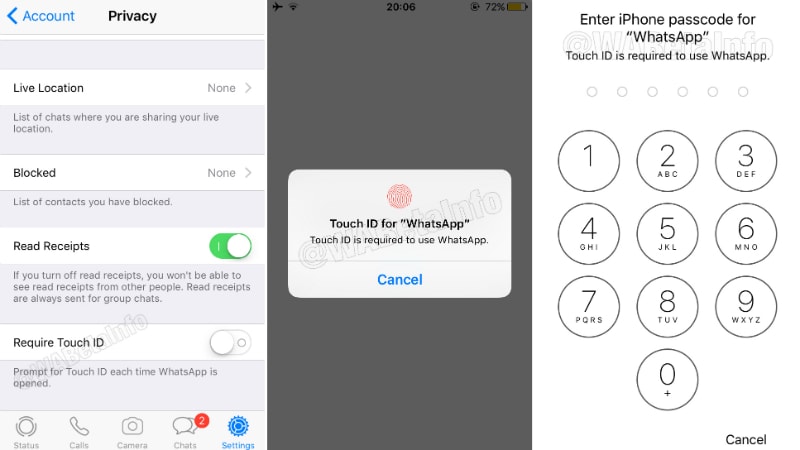 WABetaInfo folks claim that the feature using Touch ID and Face ID to access WhatsApp works without issues - despite being in the alpha stage. However, there is reportedly some lag in terms of response time to authenticate access. It is also said that WhatsApp Business app for iPhone is also set to debut with support for app authentication. There aren't any details about the release date of the app, though.