WhatsApp has received an update for iPhone, bringing support for the iPhone XS Max, a new way to play audio messages, and a redesigned UI for message shortcuts. With version 2.18.100, this update has a file size of about 92MB however that may vary from handset to handset. The highlight of this WhatsApp update is support for the large 6.5-inch display on the iPhone XS Max. This is Apple's first smartphone with display dimensions this large, and iPhone XS Max users have had to, till now, make do with a scaled down interface for the Facebook-owned messaging app.

As per the changelog posted on Apple's App Store, version 2.18.100 of WhatsApp brings the ability to automatically play consecutive voice messages in a sequence, so you don't have to press play for each instance. Apart from that, this update also brings a new layout for when you long press a message to reveal options such as reply, forward, delete, copy, and star. However, in our experience with the latest version, the design appeared to be similar to the one in previous versions of the app. 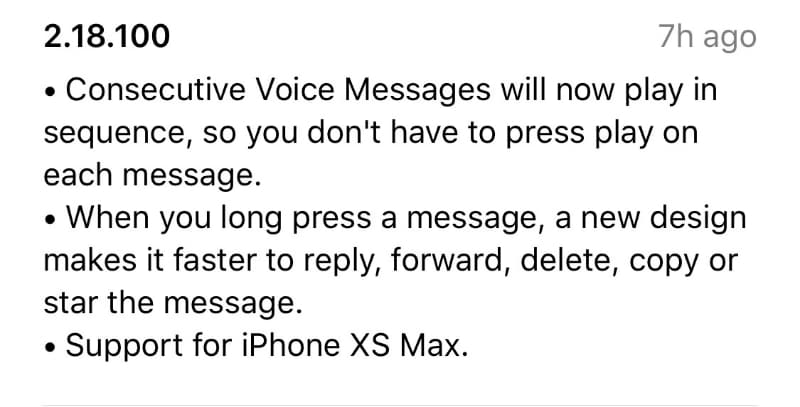 Lastly, the update also brings support for the larger 6.5-inch display of the iPhone XS Max. This will allow WhatsApp to take advantage of the large display and take up the entire screen space allowing users to read more messages and view more media.

Earlier this month, a report had suggested that WhatsApp is testing a new “Vacation Mode” that will keep archived chats in the same state even when a new message arrives in them. Currently, the app automatically unarchives an archived conversation that gets a new message. The Facebook-owned messaging giant is also reportedly working on a Linked Accounts feature that would allow users to link their social media profiles such as Instagram to their WhatsApp accounts. The feature seems to be focused towards WhatsApp for Business enterprise users.