WhatsApp for iPhone Gets YouTube Integration, Comes With PiP Feature

WhatsApp's YouTube integration feature is finally available for iPhone users. The Facebook-owned messaging app has been planning to bring YouTube support to its chat interface for a long time now. Now, iPhone users have the access to the new feature that enables users to view YouTube videos right within a chat. In order to get the new YouTube PiP (Picture-in-Picture) support feature, users need to download the latest version v2.18.11 of WhatsApp for iPhone from the App Store.

With the new YouTube support, iOS users can now tap on a YouTube link to open up a YouTube video in the app itself. WABetaInfo first spotted the new feature on the WhatsApp app. When we tested the feature, we found that instead of starting the YouTube app, the video now pops up in a small bubble. It comes with play/pause, close, and fullscreen buttons. Earlier, when users clicked on the link, the YouTube video would open in YouTube app installed on smartphones. Meanwhile, users also have the option of increasing and decreasing the size of the video bubble. The bubble can also be moved anywhere on the screen. However, when we moved the video window around, it either settled on the top of the screen or at the bottom. 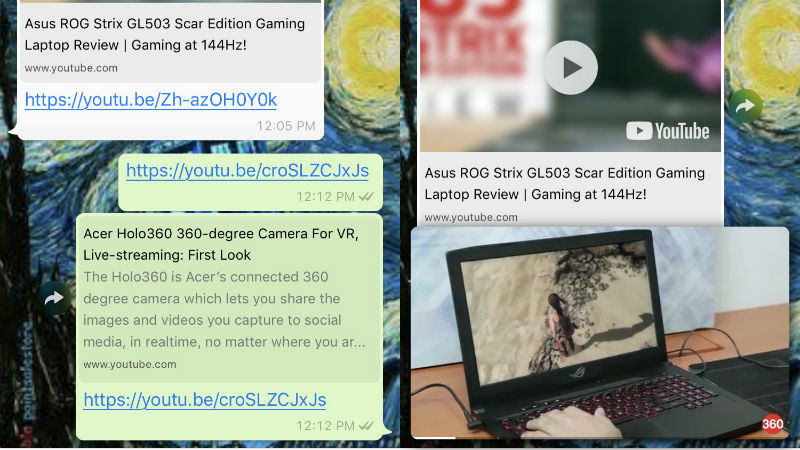 Interestingly, the YouTube bubble appears only when a user receives a video. So, if a user shares a video with a contact, they themselves cannot watch it within the app.

Notably, the YouTube video streaming feature for currently available only for the WhatsApp for iOS app. It remains to be seen when Android users will receive the update.