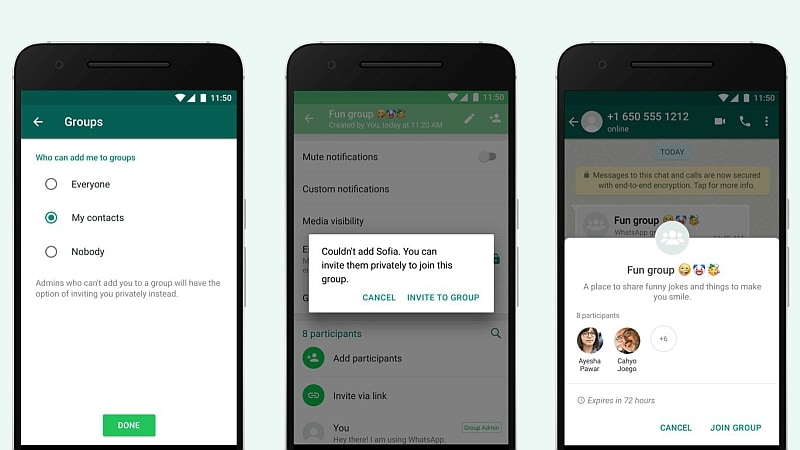 WhatsApp on Wednesday announced that it is rolling out a new privacy setting that will help you decide who can add you to groups, preventing spam additions that have been a pain point for many users. The instant messaging app is bringing an invite system for groups to essentially give users the choice of joining the group. The new update is vital considering the forthcoming election season in India that has pushed many political parties to use instant messaging apps and social media networks as a major source to influence the public.

WhatsApp said in a press note on Wednesday that through the new privacy setting and invite system, users would have more control over the group messages they receive.

To restrict joining of new groups on WhatsApp, there will be the specific privacy setting that can be accessed by going to Account > Privacy > Groups from the WhatsApp settings menu and then three distinct options will be available on the screen, namely Nobody, My Contacts, and Everyone.

If you select the Nobody option, you'll have to approve joining every WhatsApp group to which you're invited. However, the My Contacts option will enable users you have in your address book to add you to groups. There will also be the Everyone option that won't add any restriction.

In case if you've selected the Nobody option, the person inviting you to a group will be asked to send you a private invite through an individual chat. The private invite will expire three days after its receipt. Moreover, similar would be the case if you will select the My Contacts option and someone who's not from your address book attempts to invite you to a group.

Notably, instances of the new privacy setting and invite system were seen in the beta versions of WhatsApp for Android and iPhone recently. However, WhatsApp has now revealed that the new development will begin rolling out to some users starting today and will be available globally in the coming weeks. You need to have the latest WhatsApp version on your device to experience the change.

Several instances of fake news circulation through WhatsApp groups emerged in the past. Spam group invitations have also annoyed a large number of users for a long time. In May last year, WhatsApp announced that it had made it harder for users to be re-added to groups they've left to reduce spam group invites to some extent.

Earlier this week, WhatsApp announced the addition of a "Checkpoint Tipline" in India that will help people check the authenticity of the information they receive on the instant messaging app. The Facebook-owned company also added the option to let users submit misinformation or rumours they receive to the Checkpoint Tipline on WhatsApp. The move was essential to curb the proliferation of misinformation and misleading content through WhatsApp during the general elections that are kicking off next week.