WhatsApp has reportedly begun testing the group invitation control feature in Android, a feature that will allow users to decide who can add them to a group. Thanks to the nifty feature, users can avoid being added to a WhatsApp group without their permission and provides them with three levels of control over becoming members of a WhatsApp group. The feature is currently disabled by default, but was nonetheless spotted in code by beta watcher WABetaInfo. It can expected to be added soon once the bugs and glitches have been ironed out.

The group invitation control feature spotted in the WhatsApp beta update (version 2.19.55) is essentially the same feature that was released via a beta update for iOS TestFlight users. As mentioned above, the feature is currently under the early stage of development and is not widely available to all members of the WhatsApp beta programme for Android. The feature's arrival on the Android platform via the beta channel was spotted by WABetaInfo.

The group invitation feature was not visible in the WhatsApp beta for Android at the time of writing, as checked in two separate builds –version 2.19.55 and version 2.19.56. There is no word when this feature will be made available to beta testers, neither is there any information when it will be rolled out via the stable channel. 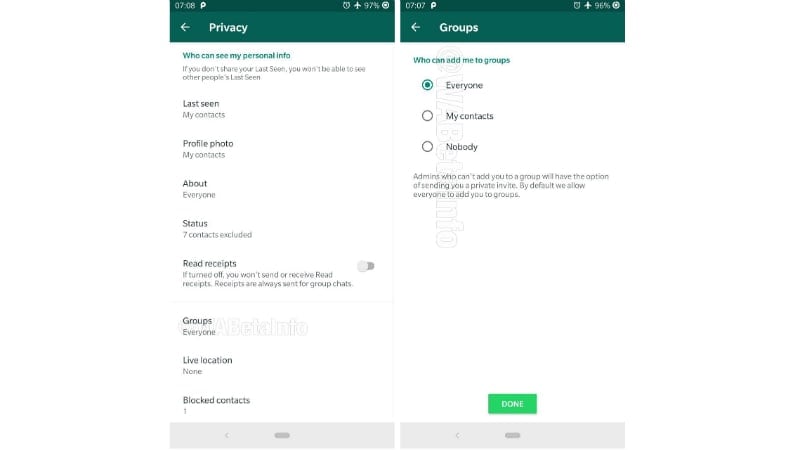 As for the group invitation feature itself, it can be accessed by going through this path on WhatsApp's Android client: Settings > Account > Privacy > Groups, WABetaInfo claims. The "Groups" sub-section allows users to choose between three invitation control settings – Everyone, My Contacts, and Nobody. The Everyone option will allow any WhatsApp user to add one to a group without the need to send an invite and wait for approval.

The My Contacts option will only allow users in an individual's contact list to add users to a WhatsApp group without having to send an invite, while the rest will be asked to send an invitation first that users can choose to accept or decline. The Nobody setting will prevent everyone from adding users to a group. Once this option is enabled, users will receive an invitation whenever an admin wants to add them to a WhatsApp group.