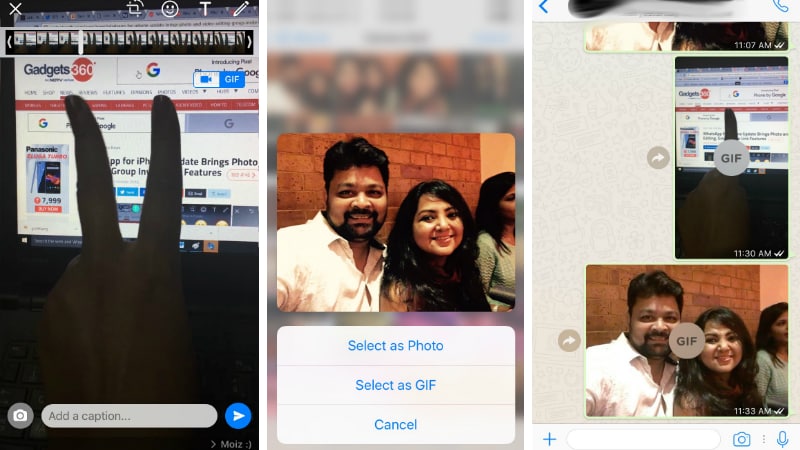 While most IM apps out there supported sharing of animated GIF images, WhatsApp was making sure that there are no hiccups in GIF support, and has been testing it on its Android app for a while now. While many users had found a way around to send GIFs on WhatsApp, a commercial full-blown release was impending. Now, WhatsApp for iPhone has finally got full-blown animated GIF image sharing support. The latest iOS update brings the ability to send, create, and receive GIFs on the instant messaging platform freely and easily.

WhatsApp for iPhone version 2.16.15 comes with a changelog on the App Store that only speaks about GIF support. For those unaware, animated GIF images are made of several images stitched together to form a loop video - limited to six seconds on the WhatsApp platform. As mentioned, WhatsApp now fully supports GIF, so much so, that it even lets you create them. Just record a video (in-app) for less than six seconds. A new toggle switch now appears on the top right edge with the option of rendering it in normal video or GIF format. Selecting the GIF option, will allow users to create a loop GIF and send it to a WhatsApp user as desired.

Furthermore, live photos can also be sent as GIFs on WhatsApp. Select Photo/ Video Library from the Attach Menu on WhatsApp, 3D Touch the Live Photo and scroll to the bottom. New options appear that allow you to send the Live Photo as a GIF or a Photo. Just select the GIF option, and send it to the desired user/group on WhatsApp. Of course, it is worth noting that the 3D Touch feature is only available to iPhone 6s users and above, so this feature is exclusive to them.

As we all know, that this feature is still in beta mode for Android users. With GIF support now available to all iPhone users, Android users should get it soon. Another big feature that WhatsApp is testing is video calling.

Recently, WhatsApp introduced a host of Snapchat-like editing tools for photos and videos as well. The IM app now allows users to write, draw, and even add smilies to media content. For iPhone users, it even launched a 'Group Invite Link' feature that allows group Admins to invite people via a unique link.