WhatsApp for iPhone has been updated to version 2.18.80 with the ability to let you send messages to your WhatsApp groups directly using Siri. It essentially extends the Siri integration within WhatsApp that first arrived back in 2016 with the ability to send individual WhatsApp messages using your voice. Alongside the Siri support for group messages, the updated WhatsApp for iPhone is reported to display images and GIFs directly on the notification banners. It is also said that you can also use the Peek and Pop gesture on the notification banner or swipe down the notification to preview the GIFs - without accessing WhatsApp.

With the latest update, WhatsApp for iPhone now lets you use Siri to send messages to your WhatsApp groups. You don't need to access WhatsApp on your Apple device and then type the message for your WhatsApp groups. Instead, you can use your voice to send an important message to one of your groups on the instant messaging app. This comes as an extension to the Siri integration that has been a part for WhatsApp since September 2016.

To send a group message using Siri, you just need to say the "Hey, Siri!" command or press and hold the home button and then ask, "Send a message to WhatsApp group [name]." Siri will after that show you a list of groups if there are multiple groups with the similar subject. Once tapped the right group from the list, you'll need to say your message and ask the voice assistant to send the same to your group. 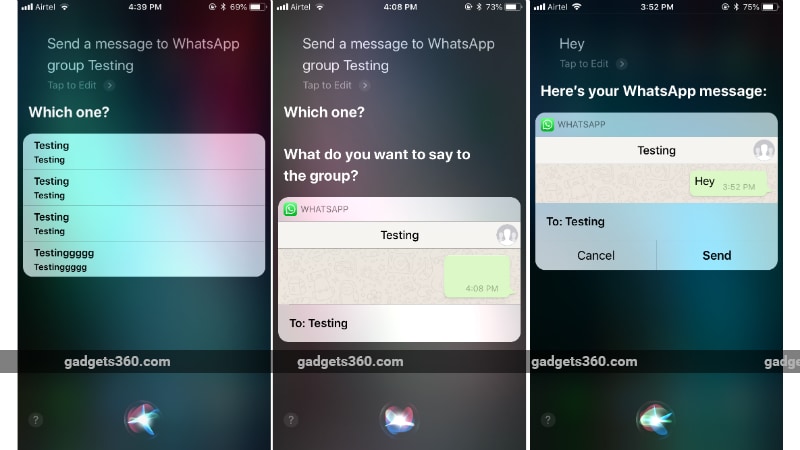 Alongside the ability to let users send group messages through Siri, WABetaInfo reports the updated WhatsApp for iPhone now shows images and GIFs on the notification banners. This is unlike the generic 'Photo' and 'GIF' labels. It is also reported that users can also download the images and GIFs directly from the notification if the media auto-download option is disabled for Photos. Furthermore, users are said to be able to preview GIFs by using the Peek and Pop gesture on their iPhone 6s and above or swiping down the notification. WABetaInfo claims that the feature works for iOS 10 and newer versions. However, we weren't able to spot the reported features on our iOS devices, and it may be a server-side switch.

The updated WhatsApp for iPhone is available for download through the Apple App Store. The app is compatible with devices running iOS 7.0 and later and is 166.3MB in size.

Further reading: WhatsApp for iPhone, WhatsApp
Jagmeet Singh Email Jagmeet Jagmeet Singh writes about consumer technology for Gadgets 360, out of New Delhi. Jagmeet is a senior reporter for Gadgets 360, and has frequently written about apps, computer security, Internet services, and telecom developments. Jagmeet is available on Twitter at @JagmeetS13 or Email at jagmeets@ndtv.com. Please send in your leads and tips. More
How to Take Screenshot in Windows 10: 4 Simple Ways to Take a Screenshot in Windows 10
EU Expected to Fine Philips, Pioneer, and Asus for Restricting Online Sales of Their Products

WhatsApp for iPhone Now Lets You Use Siri to Send Group Messages
Comment
Read in: தமிழ்