WhatsApp for iOS Gets Bigger Emojis, Ability to Delete Multiple Chats, and More 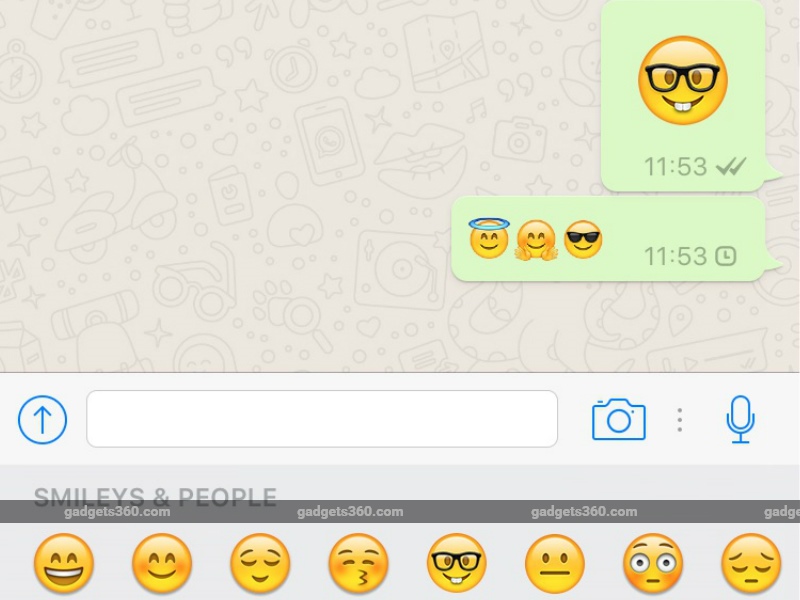 WhatsApp for iOS has received an update, and it brings along a host of changes to the app. The emojis have gotten bigger, video recording gets a new zoom in and zoom out feature, and multiple private chats can now be deleted simultaneously.

As mentioned, WhatsApp for iOS version 2.16.7 brings along bigger emojis. When users send a single emoji symbol to group chats or private chats, it is displayed bigger in size. However, if the user decides to send multiple emojis in one go, then those will show up in their normal sizes.

The WhatsApp v2.16.7 update for iOS also introduces the ability to zoom in and out when recording video. The user needs to tap the camera icon next to the text bar in order to record video on WhatsApp. Recording starts when the user holds the shutter button on the iPhone display screen. Now, just by sliding up and down, users will be able to zoom in and out of a frame. However, when you zoom in and out the recording stops and will only start once you have set your desired frame. The option to zoom in and out simultaneously while recording live has not been introduced.

The IM app claims that it has also made some bug fixes and improvements that enable chats to open faster than they did before. Apart from this update, there is also a new Olympics emoji that WhatsApp has introduced ahead of the Rio Olympics 2016. The emoji is available for Android users next to the bowling emoji, while iOS users don't have it on their keyboards yet. Users will have to copy paste a symbol in its WhatsApp chats, and the symbol can be found here.