WhatsApp, the popular cross-platform messenger app owned by Facebook, has revamped its Android app for smartphones with a Material Design makeover.

The latest WhatsApp build version 2.12.38, currently available from the company's site, sees several interface changes. The app features new icons, animations, and colour-flipped emoji tray, all while embracing its voice calling feature. After the update, the app's task bar, which is placed on top, is merged with calls, chats and contacts bar under a single colour.

On opening a chat, users would see a new round green-coloured voice-recording icon placed besides the text bar. The chat conversation now features a bubble-like chat design alongside several minor animation changes.

The attachment icons are larger and more colourful. New animations have been added, such as when clicking an image directly from the app and while sharing it. Furthermore, opening a conversation and tapping on the user's name opens a bigger image of the user's WhatsApp profile image along with other details like status, media, groups and others. 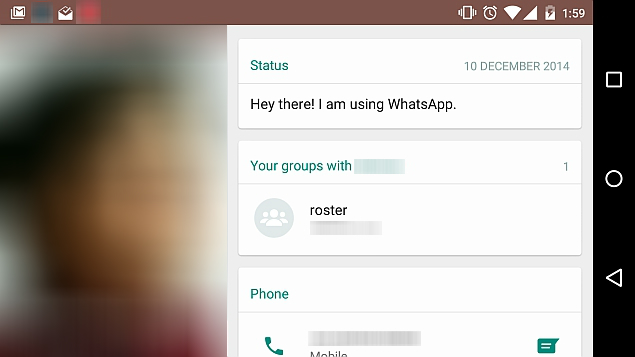 Flipping the handset while keeping the screen rotation switched on will again show a bigger WhatsApp profile image (taking almost half the screen area), while showing rest of the details on the remaining side. Notification style stays the same.

The update will roll out over-the-air soon. However, for those who don't want to wait for the OTA, WhatsApp has provided the apk file on its website to manually download and install the Material Design-based version.