WhatsApp has upgraded its multi-share feature on Android with the ability to preview the text you share with two or more contacts from third-party apps. The new development works similar to how the instant messaging app started previewing a message or media you forward to two or more chats. It is initially available for WhatsApp for Android beta version 2.18.366. However, the upgraded multi-share feature is likely to hit the stable channel shortly. WhatsApp is separately said to have built a new GIF search interface as well as a feature to let you search your favourite stickers. These features could come on a future version of WhatsApp for Android.

As we mentioned, WhatsApp for Android beta version 2.18.366 is found to bring an upgraded multi-share feature that allows you see the preview of the text that you're about to share with two or more of your contacts from any third-party apps - using the native sharing feature of Android. You'll see the text in a simple form if it's a message or a link preview if you're forwarding a URL from Twitter, YouTube, or other Web services. The feature is mainly based on how WhatsApp was previously spotted previewing the text of a message or media you forward to multiple users. Notably, that original forward preview feature is yet to debut on a stable WhatsApp version, though it was found on the WhatsApp for Android beta version 2.18.325.

The preview will be available after you hit the Share button on any of the third-party apps. It will emerge on the screen once you hit the send button after selecting at least two of your contacts. Notably, you'll see the link preview if you're sharing a URL directly from apps such as Twitter or YouTube. 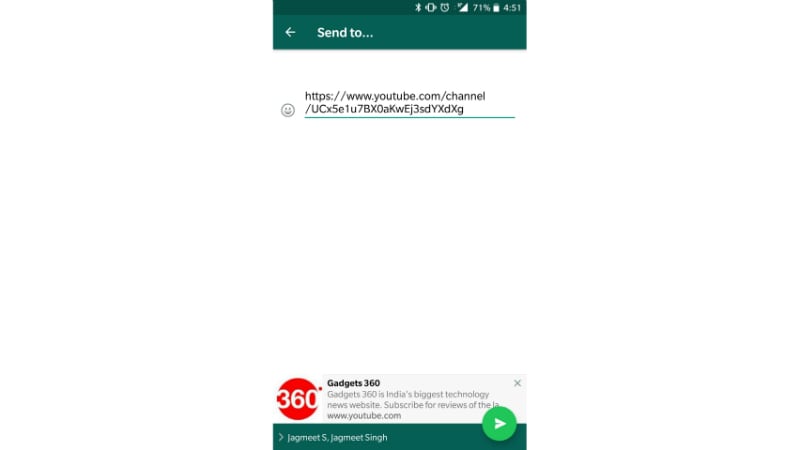 The prime purpose of previewing the text before sharing with others is to make people aware of what content they're exactly sharing through WhatsApp. It could help the instant messaging app curb the circulation of fake news to some extent.

To experience the new change, you need to download the WhatsApp for Android beta version 2.18.366. The app is available through Google Play Beta programme. Alternatively, you can download its APK file directly from APK Mirror.

WABetaInfo reported about the latest multi-share upgrade through a tweet. Folks at WABetaInfo additionally revealed that WhatsApp is working on a new GIF search interface that will make it easier to search and share your favourite GIFs. There is a Giphy-powered search bar on top to let you easily search for GIFs, as seen from one of the screenshots posted on Twitter. Also, an option to search for stickers is also reported. These new search-focused features are said to be available in the future. To recall, the company was first reported to be working on a sticker search feature earlier this month.

Further reading: WhatsApp for Android, WhatsApp
Jagmeet Singh Email Jagmeet
Jagmeet Singh writes about consumer technology for Gadgets 360, out of New Delhi. Jagmeet is a senior reporter for Gadgets 360, and has frequently written about apps, computer security, Internet services, and telecom developments. Jagmeet is available on Twitter at @JagmeetS13 or Email at jagmeets@ndtv.com. Please send in your leads and tips. More
White House to Hold Roundtable With Tech Executives on Innovation
Microsoft HoloLens AR Headset Wanted by US Army for the Battlefield