WhatsApp for Android now lets you toggle the Media Visibility feature for any specific chat. This expands the original experience that debuted on the WhatsApp beta for Android version 2.18.159 last month but was no longer a part of the app in recent versions. The feature helps you hide or show the WhatsApp media content in the gallery that you've received from a particular contact or group. The fresh experience is available through the WhatsApp beta version 2.18.194. Earlier this month, WhatsApp for Android received a new beta version with a feature to enable labels on forwarded messages. The Facebook-owned instant messaging app also recently started brought group video and voice calling support to all Android beta users. 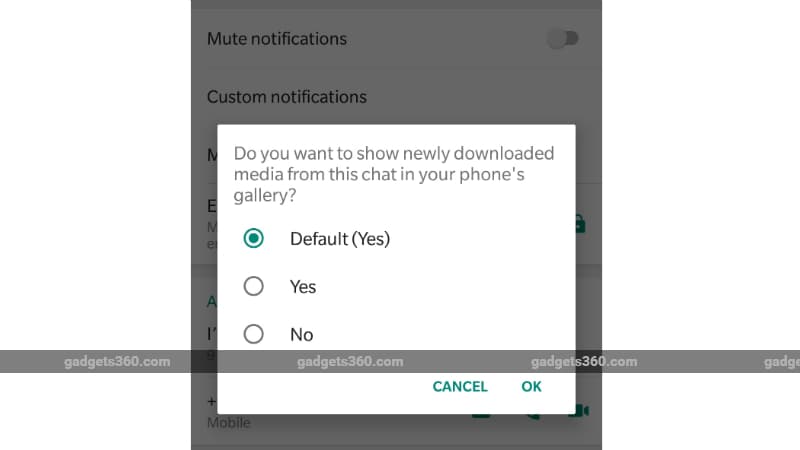 Previously, the Media visibility was available to hide or show downloaded content received from all the contacts in the gallery. It was a part of the WhatsApp beta version 2.18.194, though WhatsApp silently removed the feature in the last version.

As WABetaInfo reported, the expansion of the Media Visibility feature is live for users with the WhatsApp beta version 2.18.194. The updated WhatsApp beta is available for download through the Google Play beta programme. Alternatively, you can download its APK file from APK Mirror.

Further reading: WhatsApp for Android, WhatsApp
Jagmeet Singh Email Jagmeet Jagmeet Singh writes about consumer technology for Gadgets 360, out of New Delhi. Jagmeet is a senior reporter for Gadgets 360, and has frequently written about apps, computer security, Internet services, and telecom developments. Jagmeet is available on Twitter at @JagmeetS13 or Email at jagmeets@ndtv.com. Please send in your leads and tips. More
Uber Battles to Keep London Licence in Court Appeal
SpaceX to Launch 15th Resupply Mission to ISS on June 29