WhatsApp beta version 2.19.110 for Android has been reported to have the new emoji style

WhatsApp for Android is getting a new emoji style for its status updates section, according to a report. The new style is said to be a part of the WhatsApp beta 2.19.110, though similar to various changes in the past, the development is 'disabled by default' and isn't available for beta users. Notably, the new change has been reported just days after WhatsApp was seen developing an anticipated stickers feature. That feature was reportedly making way to Android, iPhone, and the Web. WhatsApp for Android was also earlier this week spotted getting the ability to block screenshots.

Tipster WABetaInfo reports WhatsApp beta version 2.19.110 for Android users will receive a new emoji style through the doodle picker. This new change is said to replace the existing emojis with the WhatsApp-native emojis. Importantly, the new emoji style is meant for status updates and would not bring any changes to your regular conversations.

A screenshot comparing the new emoji style with the existing one has been provided by WABetaInfo. The new style notably looks similar to the emoji characters generally available for WhatsApp chats. Also, it has been spotted in the status update section, though it could be available through the 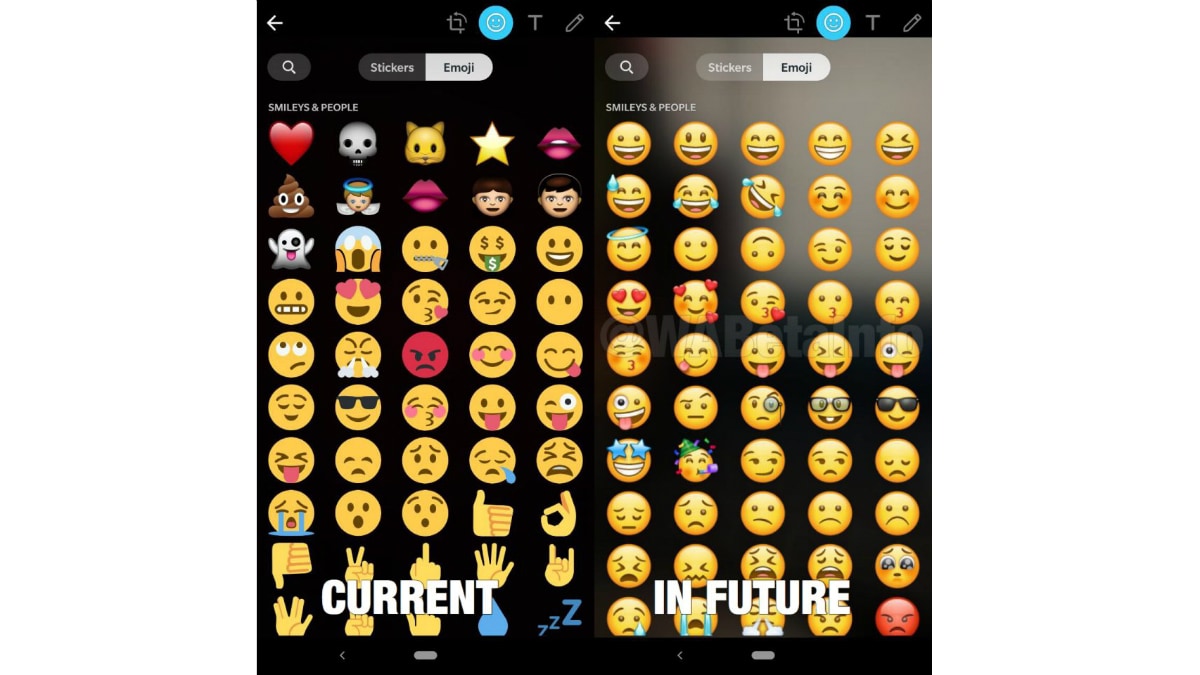 WhatsApp has been spotted testing a new emoji style (right) that is different from the existing one (left)
Photo Credit: WABetaInfo

While the new change is reportedly a part of WhatsApp beta version 2.19.110, it is yet to be available for the beta testers. It is also unclear that when would the new emoji style reach the masses through a stable WhatsApp release.

As we mentioned, WhatsApp was recently reported to bring animated stickers feature on Android, iPhone, and the Web. An ability to block screenshots was also spotted earlier this week. A new doodle UI also debuted through the WhatsApp beta version 2.19.106 for Android devices.

Further reading: WhatsApp for Android, WhatsApp
Jagmeet Singh Email Jagmeet
Jagmeet Singh writes about consumer technology for Gadgets 360, out of New Delhi. Jagmeet is a senior reporter for Gadgets 360, and has frequently written about apps, computer security, Internet services, and telecom developments. Jagmeet is available on Twitter at @JagmeetS13 or Email at jagmeets@ndtv.com. Please send in your leads and tips. More
Google Employees Worried of Measles Spread in HQ
Final Fantasy X and X-2 Remaster Not Xbox One X Enhanced Despite Microsoft Advertising: Square Enix