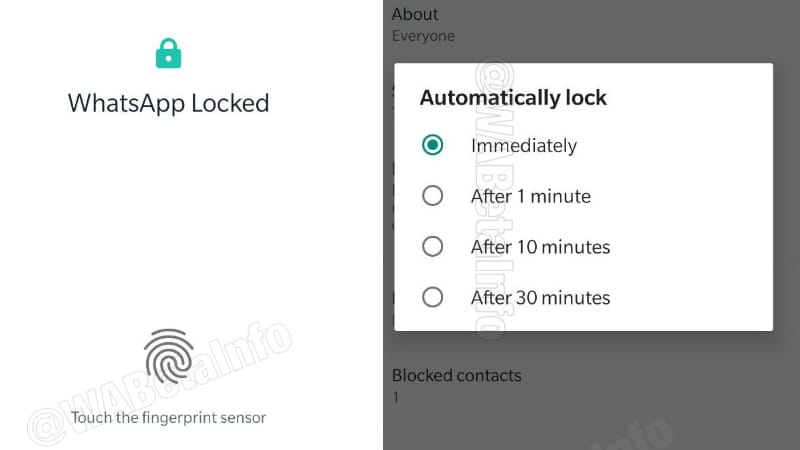 WhatsApp fingerprint authentication has been sighted in the app's new Android version 2.19.83

WhatsApp has updated its Android beta app to version 2.19.83, and traces of a new Authentication feature were spotted. The company has been working on bringing this feature since a while now, and the latest update shows that WhatsApp has made a lot of progress. Beta tracker WABetaInfo has shared screenshots showing how the Authentication feature can be enabled in Settings, and what the interface will look like. Unfortunately, this feature is disabled by default, so it won't work for beta users as of yet. It remains unclear when WhatsApp plans to roll it out for the stable version users.

The tracker says that the Authentication feature will let WhatsApp users lock their account, and unlock it using a fingerprint sensor. This feature should be enabled in Settings >Account >Privacy > Use Fingerprint to Unlock. Once it's enabled, WhatsApp will register your fingerprint. It will then ask if you want the app to be locked immediately (after you leave the app)/ after 1 minute/ after 10 minutes/ or after 30 minutes.

WhatsApp will show a sign indicating to users that they needs to unlock the app using fingerprint authentication. It will show an error if the app is not unlocked after multiple tries. As mentioned, this feature isn't enabled yet, so you won't see it even if you are on the latest beta version 2.19.83. This feature should roll out for beta users in next updates. Notably, iPhone users already have the feature in the stable version of the iOS app, and apart from fingerprint authentication via Touch ID, facial recognition via Face ID is also available to them.

WhatsApp is also working on Dark Mode, and it was spotted in one of the recent beta updates. However, there is no word on when the WhatsApp Dark Mode will make its way to the stable version. Recent beta versions also indicate that WhatsApp is working new forwarding features as well.