Years after its launch, the Facebook-owned WhatsApp Messenger has finally received the ability to send documents over chats. The feature is visible in the most recent builds available via Google Play and the App Store - Android v2.12.453 and iOS v2.12.4. WhatsApp has also introduced a bunch of other features with the updates.

On Android, the WhatsApp v2.12.453 that's available from Google Play for some users shows a 'Document' option in the Attachments section (seen above). Not all users with the same app version are able to view the option at the moment. However, most users on the latest app version available from the company site - v2.12.489 - are able to see the option, indicating a server-side update. For now, users can only send pdf files but the file support is likely to expand in the future.

To note, as before, there are six attachment options, with Photo and Video now being combined into Camera due to the addition of Document. Users will be able to see shared Documents alongside Media and the newly-added Links tab. It is worth mentioning that a user cannot send a document until the receiver has also updated the app to the same or newer Android app version. However, we tried sending a document from iOS v2.12.14 to Android v2.12.489 over WhatsApp and it worked fine. 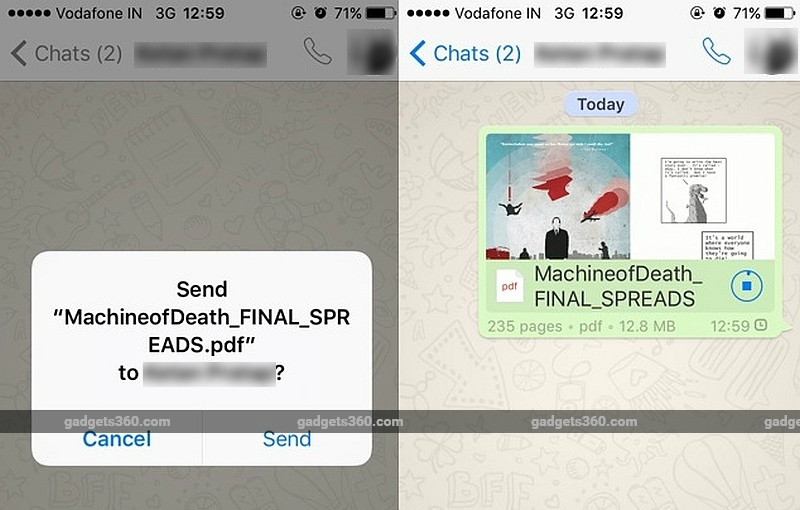 The WhatsApp v2.12.453 for Android, as mentioned in the Google Play listing, additionally brings over 100 new emojis, Google Drive Backup for chats and media, support for 5 new languages, and is now is compatible with Android 6.0 Marshmallow permissions.

In the meanwhile, WhatsApp for iOS v2.12.4 lets users share photos or videos from other apps such as Google Drive, Dropbox, or Microsoft OneDrive. Users would just need to open "Photo/Video Library" and tap "Choose from another app..." to share files. In addition, users can pick from a set of solid colors for chat background. Besides an improved design for browsing photos and videos, iOS users can even zoom in on videos while they are playing.

Another key feature added in the WhatsApp iOS app update is that users can now see the "blue ticks" (indicating that the message has been read by the other party) directly from the main WhatsApp chat list. Previously, one needed to tap on the chat to open the thread and see if the receiver has read the messages or not. The updated app is available to download from App Store.