WhatsApp is reportedly rolling out the Facebook Messenger Rooms integration on the beta version of its app for Android. The feature was spotted in the WhatsApp version 2.20.163 beta for Android that is now available to select beta users. It is also speculated that more beta users will be receiving the update soon. Currently, the feature is available to select users in the US only, as per a report. The development comes a day after Facebook globally rolled out its Messenger Rooms feature that allows users to group chat with as many as 50 people. Facebook had also announced that the company will integrate Messenger Rooms on Instagram and Facebook Portal but there is no clarity on the timeline.

According to a report by WABetaInfo, the Facebook-owned WhatsApp messenger has added the Facebook Messenger Rooms shortcut on WhatsApp version 2.20.163 beta for Android. The Messenger Rooms shortcut was also spotted on WhatsApp version 2.20.139 beta for Android, however, it was not available to beta users and more importantly, the integration was not functional. But with the current rollout, it seems that the option is now functional, depending upon the availability of Messenger Room in your region.

To check out the Facebook Messenger Rooms shortcut on the WhatsApp version 2.20.163 beta, users have to open the chat share sheet to find the "Room" button integration. The Rooms shortcut replaces the old Camera button that is still available in the chat bar, as per the report. Once the user selects the Room option, a window reportedly appears, explaining the feature. 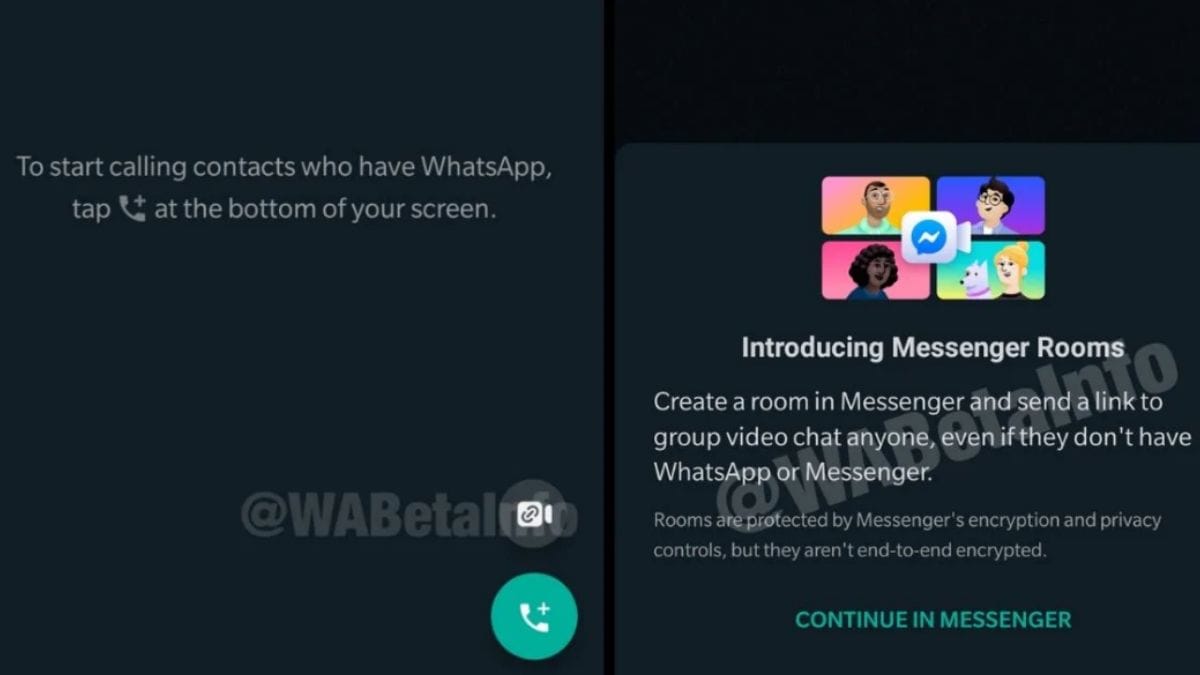 The new window on Whatsapp version 2.20.163 beta highlights text saying that Rooms are protected by Messenger's encryption and privacy controls. However, it is added that "they [video group calls] aren't end-to-end encrypted."

The report further claims that the beta users on this version could find the Rooms shortcut in the call tab as well. The Call tab on WhatsApp beta for Android is present at the top right corner of the app. Once the beta user selects the Room icon in the call tab, a new window appears that asks whether the users want to continue to the Messenger Rooms.

Meanwhile, Facebook has started rolling out the Messenger Rooms feature globally for its users. The feature allows as many as 50 people to join a single video chat without the need for a Facebook account.