WhatsApp Services Restored After Brief Outage in India and Other Regions 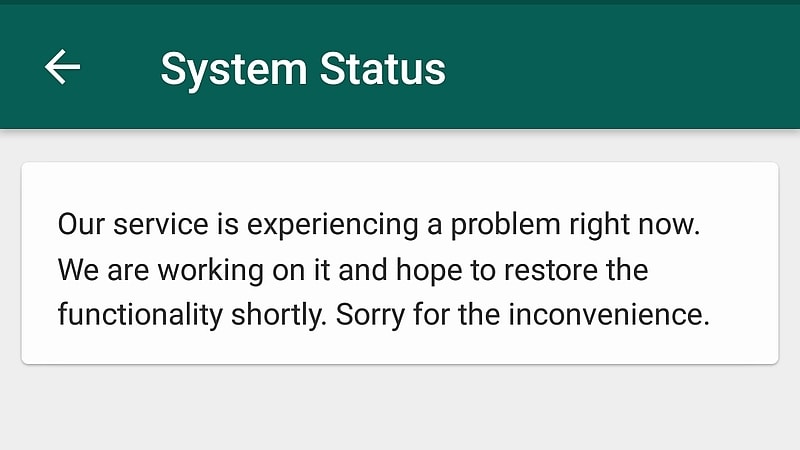 WhatsApp services were restored about two hours after a disruption caused the app to become unavailable for a large swathe of users across the globe. #whatsappdown became the hashtag of choice for Twitter users from different countries to report this issue. Crowd-sourced service outage site Down Detector also showed problems, with cases being reported across the world starting from about 1pm IST. In India too WhatsApp was down for many users, with no messages going through, and navigating to the Settings > Help > Contact Us section is showing some users an error message (seen above).

"Our service is experiencing a problem right now. We are working on it and hope to restore the functionality shortly. Sorry for the inconvenience."

At 3pm IST, WhatsApp appeared to be back up for most users, though the app still showed the above error message even to users who are able to send/ receive messages.

Even while it was down, WhatsApp appeared to work intermittently for some users, while services were up and running for others despite showing the above error message. As per Down Detector's live outage map, India (especially the western regions), South East Asia, and Europe were majorly affected, with fewer reports out of the Americas, Africa, Russia, and Australia.

This appears to be the third major disruption of the year, with one as recently as August affecting users across the world as well. Prior to that, the Facebook-owned service suffered an outage twice within two weeks, in May, one of which lasted several hours.

As we mentioned, WhatsApp users took to Twitter to vent their dismay, and it is became the number one Twitter trend in India. Reuters reported it was also a top trending item on Twitter in Pakistan, Britain, Germany, and many other countries. The widespread outrage goes to show just how pervasive these services have grown to become. The service has 1 billion daily active users, and 1.3 billion monthly active users, as per the figures it shared back in July.

Are you still facing problems using WhatsApp? Let us know in the comments section below, indicating your location to give our other readers a better idea.