The WhatsApp translation requests, text strings sent by the company to volunteers to translate UI and other text, indicate the company is working to integrate Google Drive for backing up text messages and media excluding videos. Text strings for options to back up to Google Drive only via Wi-Fi, or to allow use of cellular data were visible well.

One of the requests indicates that the restoring via Google Drive feature is offered to users when they log in on a new device, but if users don't accept they will lose their backup from their previous device. 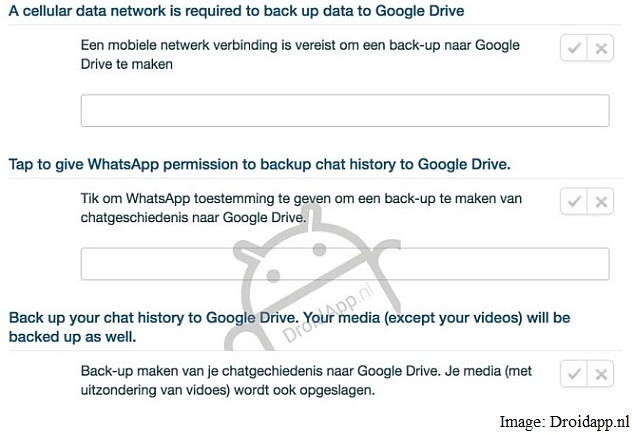 So far, there has been no confirmation about the rollout of the backup and restore via Google Drive feature from WhatsApp.

If real, the Google Drive backup feature could be a real boon for users that struggle with the current backup and restore feature.

Currently, WhatsApp offers a backup method for Android users that requires them to back up their conversations via Menu Button > Settings > Chat settings, then check whether their WhatsApp/Database folder is located on their external microSD card or device's internal memory, transfer the folder over the new device which must have the same phone number, install the app on the new device, and then click Restore when prompted.

Users cannot restore chat history from any other phone type to Android, or from Android to another phone type. WhatsApp adds that it is possible that some files will go missing during the transfer.