Google’s Data Restore Tool is present in Android devices by default and only shows up when setting up a new device. 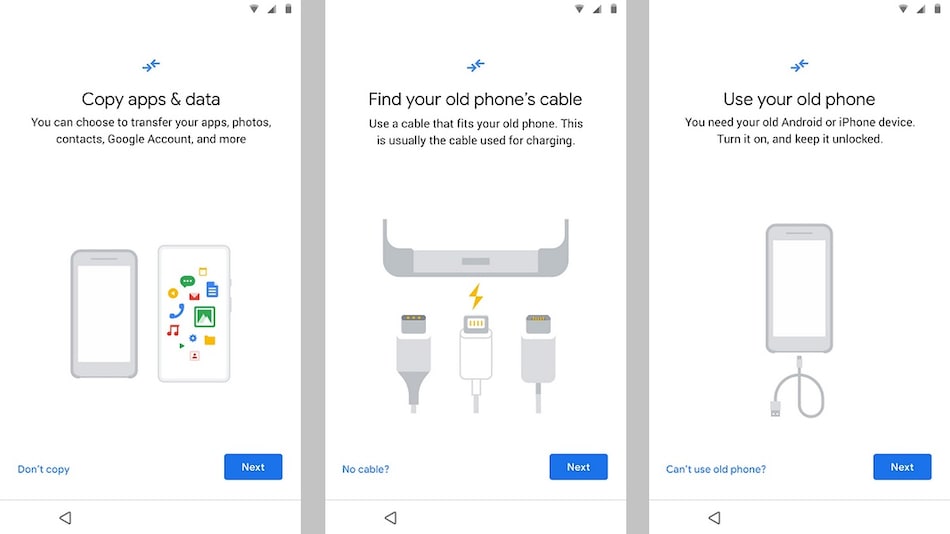 Google's Data Restore Tool may soon allow users to transfer their WhatsApp chats from iOS to Android devices. The latest update to the app that was recently added to the Google Play store reportedly shows references for copying WhatsApp chat history from an iPhone to an Android phone. The Data Restore Tool, present in Android device by default, shows up while you are setting up a new Android phone and want to transfer your data from an old device. As of now, Google has not shared any information on the WhatsApp cross-platform chat transfer feature.

Google's Data Restore Tool was released last week on the Google Play store as a standalone app to let users restore data using a cable or a cloud backup. 9to5Google found that the latest update to the app — version 1.0.382048734 — had references to copying WhatsApp chats and history from an iPhone to an Android phone in its code. The references included “Scan the QR code with your iPhone to open WhatsApp, then tap Start”, “Keep your iPhone unlocked and WhatsApp open”, “Trouble scanning? On your iPhone, open WhatsApp, then go to Settings > Chats > Move Chats to Android”, among others.

This means that the Data Restore Tool app could show a QR code that will need to be scanned via an iPhone, which will then take the user to WhatsApp's chat migration settings that were reported by WhatsApp update tracker WABetaInfo earlier this month. WABetaInfo found that the Android beta for the Facebook-owned instant messaging app was testing chat migration from iOS to Android. At the time, the process was shown with a wired connection between the two devices.

With Google and WhatsApp both apparently working on a more seamless way to transfer chats from iOS to Android, the feature may be officially unveiled soon. However, as of now, neither Google nor WhatsApp has shared any information on it.

WhatsApp recently updated its calling interface for iPhone users, making it easier to add people to an ongoing call and allow them to join a group call even after it starts. This new interface has been made available to Android users as well over the last week.