WhatsApp has released a new beta version for Android devices that brings a redesigned Storage Usage section for testing purposes. Some screenshots showing the update emerged on the Web last month. WhatsApp 2.20.201.9 beta for Android is the first release that offers a glimpse into the redesigned Storage Usage section that makes it easier for users to manage their storage. The section includes a modern storage bar to detail the space consumed by WhatsApp media files. You'll also be able to see large files received through the app.

As reported by WhatsApp features tracker WABetaInfo, the updated WhatsApp beta for Android is slowly bringing the redesigned Storage Usage section for beta testers. The feature isn't live for all beta testers initially, though.

The redesigned Storage Usage section was initially leaked by the features tracker in June and reached its current state last month. It carries a modern storage bar at the top with details about the portion of space consumed by the media files shared over WhatsApp. There are also specific listings for forwarded files and large files under Settings > Data and storage usage > Storage usage > Suggested clean up option. 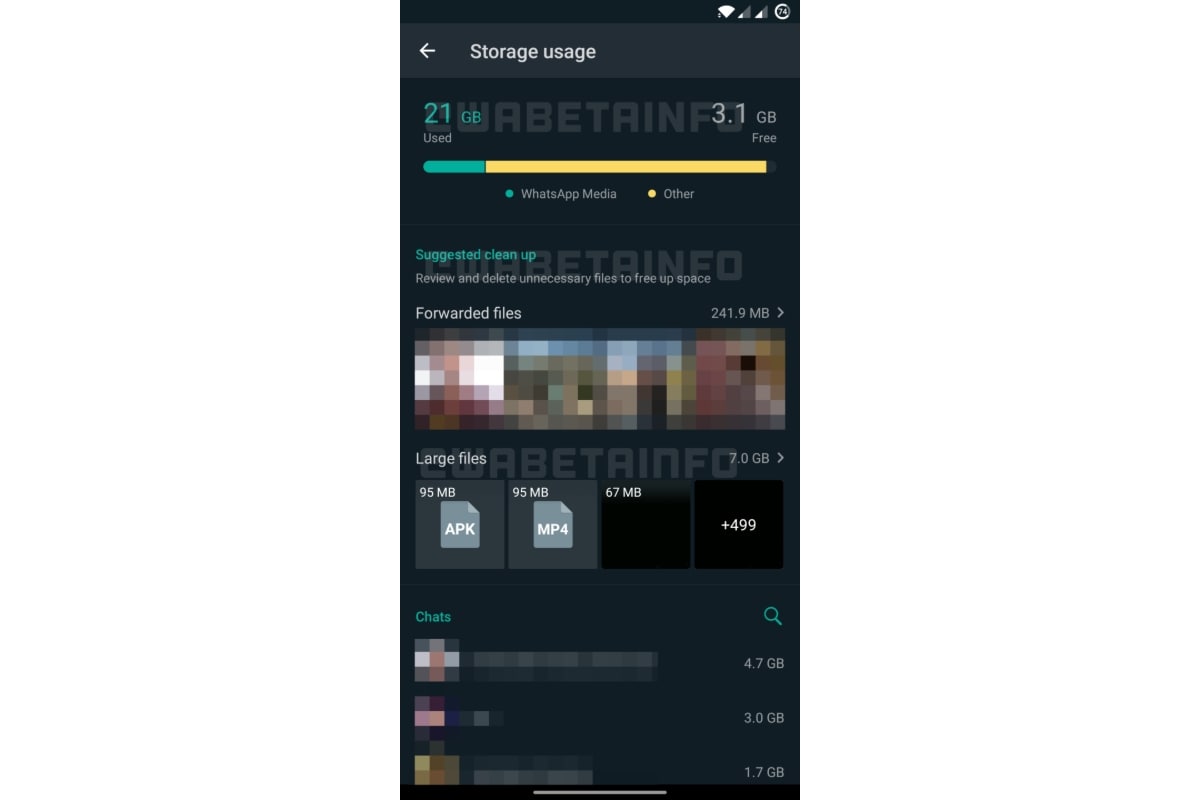 WhatsApp is rolling out the redesigned Storage Usage section for beta testers ahead of its public release
Photo Credit: WABetaInfo

The Storage Usage section also lists individual chats and groups — arranged as per their storage size. There is also a search functionality to let users find any particular chats or groups from the list.

WhatsApp hasn't provided any details about when it would bring the redesigned Storage Usage section for users in a public release. However, if you're using its beta version on your Android device, you can look for the update by going through Google Play or sideloading the latest version from APK Mirror.

It must be noted that the redesigned Storage Usage section isn't available for all beta testers initially and is rolling out slowly through the WhatsApp 2.20.201.9 beta. Thus, chances are high that you may not get the new experience even after quickly updating the beta release on your phone.

Further reading: WhatsApp for Android, WhatsApp Storage Usage, WhatsApp
Jagmeet Singh Email Jagmeet Jagmeet Singh writes about consumer technology for Gadgets 360, out of New Delhi. Jagmeet is a senior reporter for Gadgets 360, and has frequently written about apps, computer security, Internet services, and telecom developments. Jagmeet is available on Twitter at @JagmeetS13 or Email at jagmeets@ndtv.com. Please send in your leads and tips. More
Oppo A93 Confirmed to Launch on October 6, Design Details Teased