WhatsApp is reportedly rolling out the Advanced Search Mode for beta testers on Android. This feature is gradually being enabled for beta users, which means it should be seen if on the latest beta. This feature was spotted under development on various occasions in the past, and now it appears to be available for testing for beta users. Furthermore, WhatsApp has also been spotted making improvements to the anticipated Expiring Messages feature. New screenshots give us a glimpse how this feature is intended to work when it launches commercially.

Starting with Advanced Search Mode, WhatsApp features tracker WABetaInfo notes that the feature is finally rolling out for certain beta testers. Few users should be able to spot it between WhatsApp v2.20.197.7 beta for Android and WhatsApp v2.20.197.10 beta for Android. The tracker reports that WhatsApp is enabling this feature from server side for a few beta testers. The activation seems to be partial and slow, as WhatsApp wants to ensure that there are no crashes or bugs. Gadgets 360 wasn't able to spot this feature on the latest Android beta. Once activated, the Advanced Search feature should allow users to narrow down their search to photos, videos, links, GIFs, audio, and even documents. 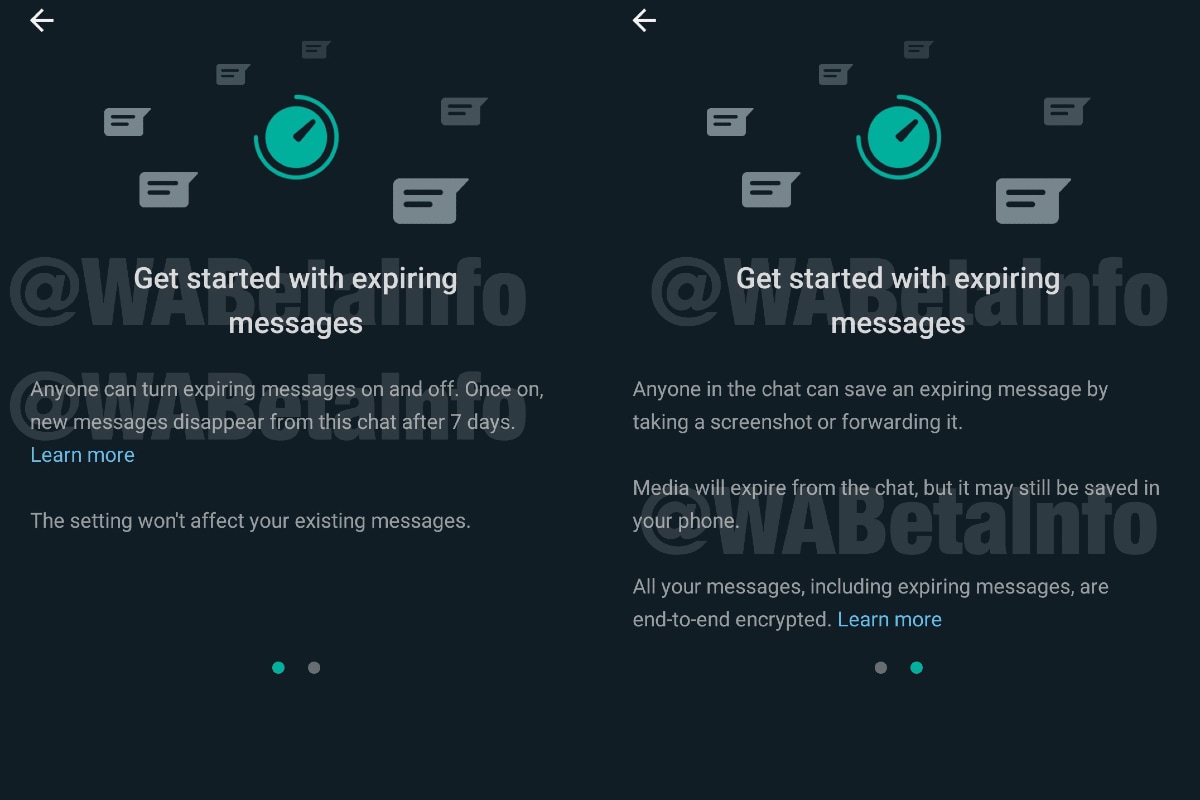 A new panel that introduces the Expiring Messages feature was spotted in WhatsApp
Photo Credit: WABetaInfo

This introduction page reveals details on how this feature looks to work when it launches. It is discovered that anyone can turn on and off expiring messages in chats. For groups, only group admins can toggle the option, and messages sent and received when the feature was disabled won't be affected. Once enabled, new messages will disappear from the chat after seven days.

Apart from chats, media will also expire in the chat as well, but some images/videos might be previously saved before the expiration. The tracker notes that even expiring messages are always end-to-end encrypted. There is no word on when this feature will be enabled for beta testers. For now it is under development, and users may not see it even if they are on the latest beta.

Further reading: WhatsAp, Advanced Search Mode, Expiring Messages, WhatsApp Beta
Tasneem Akolawala Email Tasneem
Tasneem Akolawala is a Senior Reporter for Gadgets 360. Her reporting expertise encompasses smartphones, wearables, apps, social media, and the overall tech industry. She reports out of Mumbai, and also writes about the ups and downs in the Indian telecom sector. Tasneem can be reached on Twitter at @MuteRiot, and leads, tips, and releases can be sent to tasneema@ndtv.com. More
Nintendo Profit Jumps 428 Percent Thanks to Animal Crossing: New Horizons