WeChat for Android Updated With Message Translation Feature and More 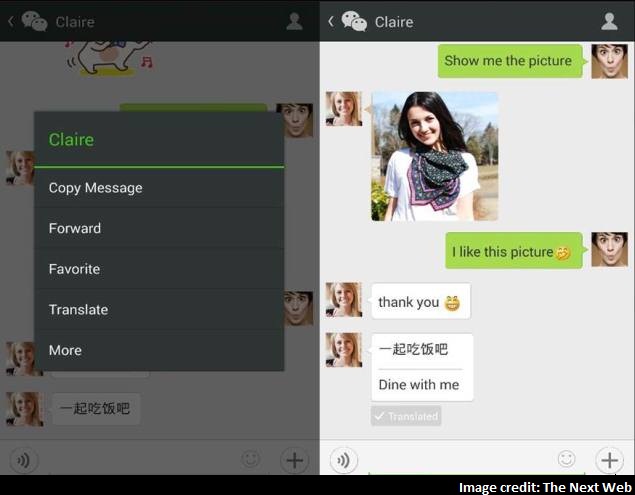 The social networking and instant messaging app - WeChat - has brought its message translation feature for its Android users too. The feature was rolled out to iOS users last month.

The updated WeChat app for Android is available to download via Google Play. To use the translate message feature, users need to long-press on a message and then tap the arrow icon on the right-hand side to activate the tool, just like the WeChat app for iOS devices.

Now when a user long-presses any particular message, it can be translated by tapping Translate in the popup menu. Once translated, the message will be shown just below the original message separated with a line. Notably, the WeChat app for Android currently offers the translation feature for more than 20 languages including Chinese, French, Spanish and more.

Other than the message translation feature, the WeChat app for Android also gets password protect feature for group chats, the ability to tag favourite messages for faster searches, and the ability to select multiple messages and add them to Favourites.

Users of WeChat can access the 'Favourite' option on their chat screen to save pictures, voice notes, videos and text messages directly on the cloud, the company had then said in a statement. The saved documents can be accessed any time and on multiple devices.

"The 'Favourite Message with 1GB cloud storage' feature enables users to save their favourite memories in the form of texts, videos and picture format without having to compromise on their device space and, also enables them to access these with just one touch whenever they want," Tencent India Vice-President, Marketing and Business Development, Nilay Arora said.
Comments