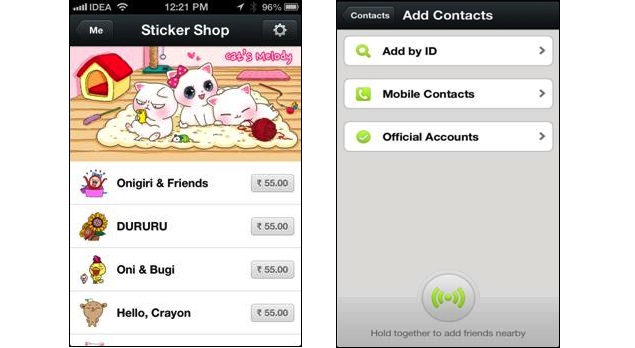 Mobile instant messaging app, WeChat, has received a major update, offering new features like in-app purchase for stickers, a location based friend finder service and revamped official accounts, among others.

The new version (version 5.0) is now live on the App Store for iPhones, while the Android version will be available at a later date, according to the company.

WeChat 5.0 includes Sticker Shop, an in-app purchase mechanism for downloading and paying for stickers. This essentially means that users will be able to buy sticker packs within the app through their iTunes accounts. Mobile messengers are increasingly using Stickers as differentiators to build engagement among users and for monetization.

"The new WeChat 5.0, we are aiming at taking the platform to the next level making it more than just a simple chatting app and enriching the user experience by being a truly mobile social platform. Users not only meet, chat and share moments, pictures and videos, they do it in a dynamic and intuitive fashion," said Poshu Yeung, Vice President at International Business Group at Tencent, the company behind the WeChat app.

WeChat 5.0 also features 'Hold Together,' a location based service that allows users to find and connect friends who are in close proximity. It also offers 'Shake' and 'People Nearby' (previously called "Look Around"), to connect with friends.

The updated app also makes sharing web pages to Facebook easier for users who have linked their Facebook account to their WeChat accounts. It also brings a revamped 'Official Accounts' user interface with brand accounts grouped into one single category to reduce clutter on chat screens. It also allows users to save text, voice messages and photos, following the update.

"While WeChat users enjoy connecting with friends and meeting new people; WeChat's comprehensive privacy settings allow users to limit and control who is able to communicate with them, who can view information and manage how they can be found. For added security and control, protection mechanisms such as the two-way authentication to initiate a chat, ability to hide contact details, create a 'black list' to block users and allowing users to turn off LBS features. This means they can share experiences only with the people they trust," continued Yeung.

WeChat claims to have 70 million registered users, globally. It competes with apps like WhatsApp, Line and Viber.
Comments