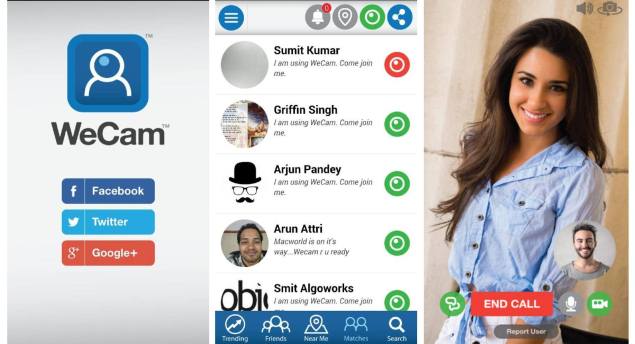 Windsor, UK-based WeCam Inc. at the MacWorld conference in San Francisco on Wednesday announced its new socially-integrated WebRTC video chat application, WeCam, for Android and iOS users. The app is notable as it allows users to video chat with contacts from across social networks.

The WeCam app is free to download and ad-supported, while an in-app purchase of $0.99 removes the ads. It works with iOS 6.1 (according to the iTunes listing) or later devices (iPhone, iPad, and iPod touch), and Android 4.0 or higher devices (as seen on the Google Play store). Notably, WeCam itself says its iOS app is compatible with devices running iOS 7.0 or higher.

WeCam combines contacts from three popular social-networks - Facebook, Google+, and Twitter - into one application. It works with a unique matching algorithm that WeCam Inc says it intends to patent.

The difference between WeCam and other video chat services is that it uses WebRTC (Real Time Communications) technology, which leverages the OpenTok platform. It combines both front and back cameras and delivers a real-time video.

"We have made investments over the last year that have resulted in a world-class product. The choice to utilize WebRTC and the OpenTok platform to power our app has proved to be invaluable" says WeCam Inc. President and CEO, Rob Whent.

The WeCam video chat app lets you make 'Tags', which helps users connect to different people with similar interests. WeCam app also boasts of one other interesting geo-location feature, letting users see who's online and nearby.

Apart from the three popular social-networks, WeCam Inc noted that it will also include the ability to connect additional social networks, as well as video calling for up to four users on one screen, in its future releases.

Spice Smart Flo Mettle Icon with 5-inch display, 3G support launched at Rs. 6,999
Samsung Galaxy S5 price in India not confirmed, but we do have a price range