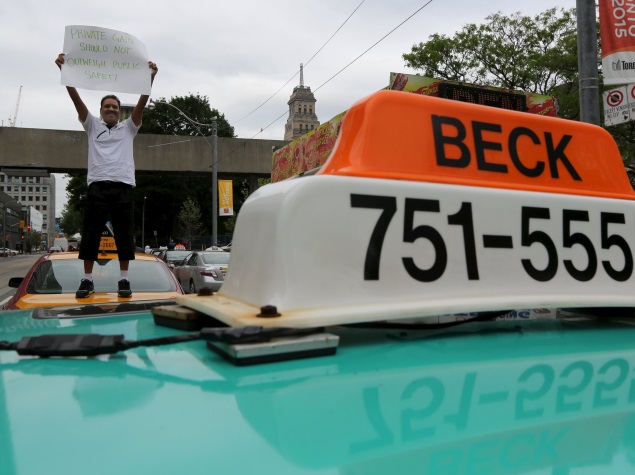 Taxi drivers packed a courtroom in Canada's largest city on Monday as Toronto stated its case for the Uber ride-sharing service to be regulated like the traditional cab companies with which it competes.

Toronto is seeking an injunction to halt Uber's operations unless the San Francisco-based company and all its drivers are licensed.

Uber is fighting for legal status worldwide, one jurisdiction at a time, as authorities weigh the legality of its phone-based app, and Uber drivers argue they should be treated as employees, not independent contractors.

Outside city hall, taxi drivers parked three-deep and beeped their horns, while others moved in a slow procession through downtown, clogging much of the business district. The protesters fear the threat that Uber represents to their livelihood.

Akhbar Banijamaat, who left Iran in the 1980s with his family and has driven taxis in Toronto for 17 years, said the upstart company should abide by the law.

"Some people support Uber, the mayor supports Uber," Banijamaat said. "I don't mind Uber, I think it's a beautiful idea, to whoever did it, very nice. But do it legal."

Despite Toronto's legal bid to regulate Uber, the city's mayor, John Tory, says he accepts ride-hailing apps as part of the contemporary landscape.

On Monday he said he hoped the parties could reach a negotiated settlement ahead of the judge's ruling.

"Both (Uber and the taxi industry) are going to have to adapt themselves to the reality of a fair and fairly-regulated industry that focuses on serving the public better as opposed to suiting themselves," Tory told Reuters.

The Toronto taxi-driving protesters focussed their ire on UberX, a budget option in which drivers use their personal vehicles, as a threat to public safety. Uber's other service uses licensed drivers.

Uber, which is valued at $40 billion, says it simply provides technology allowing drivers and passengers to find each other and should not be treated as a broker. It said the taxi protest was counter-productive.

"Rather than blocking roads and preventing people from getting where they need to be, we're focussed on meeting the needs of Toronto's riders and drivers, who are all too often left out of the debate," said Uber Canada spokeswoman Susie