To make daily commutes cheaper, Uber has launched Ride Packages in India. The latest feature that brings flat-fare ride passes to riders is initially rolling out for select riders in seven cities across the country. While riders in Delhi, Bengaluru, Mumbai, Hyderabad, Pune, and Kolkata can avail the flat fares on their UberGO and UberPREMIER rides, Chennai riders with the ride passes can only opt for UberGO rides. Each flat fare ride pass comes with a validity of up to 28 days and has a certain trip limit. Recently Uber's closest competitor and one of the leading cab aggregators in the country, Ola, was also spotted with a similar feature that it called Ola Pass.

An Uber spokesperson divulged that the Ride Packages is an evolution of the UberPASS that was launched as a pilot in select riders in June last year. "We are always thinking of new ways to enhance the Uber experience for our riders. UberPASS was one such product that was launched as a pilot in select cities. It helped us better understand our riders' needs and as a result, Uber recently rolled out a more enhanced product called Ride Packages," the company said in a statement to Gadgets 360. 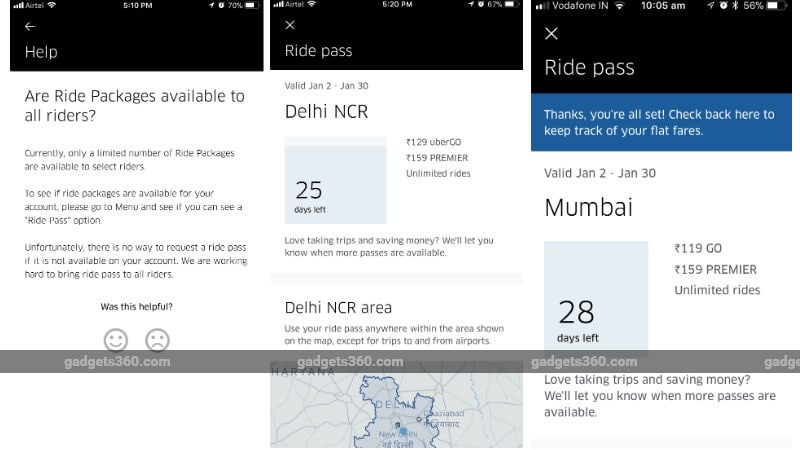 It is worth noting here that the Uber Ride Packages is not yet available for all users. However, we spotted its presence in Delhi and Mumbai. In the Mumbai region, riders can get flat fare UberGO rides at Rs. 199 and UberPREMIER rides at Rs. 159. The riders in the Delhi region, on the other hand, are offered with UberGO rides at Rs. 129, while UberPREMIER rides are available at a charge identical to what is available in Mumbai, which is Rs. 159. Initially, Paytm is the only payment option for the passes opted under the Ride Packages.

As per the FAQ seen in the app, Uber may charge wait time charges in addition to the flat fare amount. Also, we noticed surge pricing will still be applicable despite purchasing the flat-fare ride passes. We've reached out for more information on this front.

Similar to Uber Ride Packages, Ola last month started rolling out the Ola Pass subscription to offer flat fares in the country. Ola's feature is listed as available for a select number of Ola Micro, Mini, and Prime rides and is available in a handful of cities, including Bengaluru, Chandigarh, Chennai, Delhi, Guwahati, Hyderabad, Jaipur, and Mumbai. Unlike Uber, Ola doesn't apply peak pricing - its terminology for surge pricing - on Ola Pass flat fares. However, Ola has distance limits to the flat fares, from 5km to 20km, which Uber's Ride Packages do not have.