The new Uber feature would work quite similar to the Public Transit option available on Google Maps. 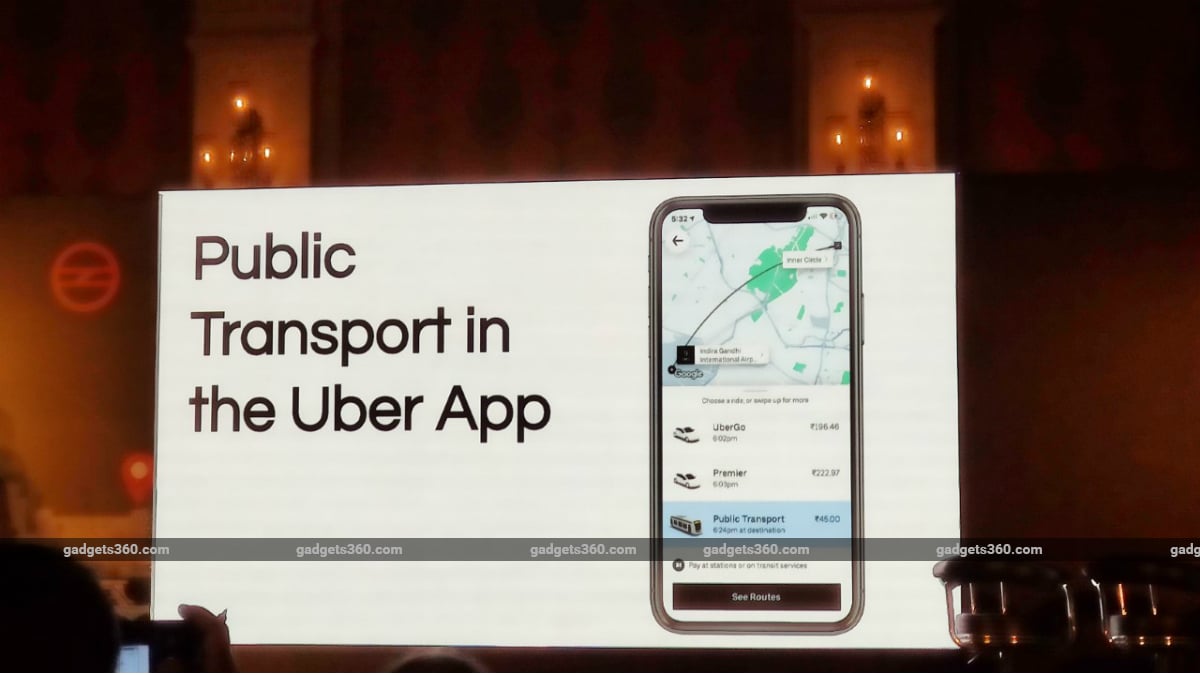 Uber on Tuesday launched its Public Transport feature in New Delhi. The new feature that is yet to roll out is aimed to help riders by offering real-time information for public transport and end-to-end directions directly through the Uber. The Public Transport feature will be accessible with UberGo, Premier, and Pool ride options. The San Francisco, California-headquartered company has also announced its partnership with the Delhi Metro Rail Corporation (DMRC) to bring a "seamless first-to-last mile experience".

Through the Public Transport feature, the Uber app will let riders see the fastest and the cheapest routes as well as view real-time schedules and departure time of public transportation, including metro trains, buses, and walking directions to and from nearby metro stations and bus stops. A dedicated Public Transport option will be available next to the existing UberGo, Premier, and Pool options once the rider has selected a certain destination on the app.

Uber will initially offer price estimates and projected arrival times through the Public Transport feature. However, since the company has partnered with DMRC, it would over time let riders receive a seamless first-to-last mile experience through the Uber app. This means that the riders would get the ability to not just book an Uber cab but also get a metro ticket directly from the Uber app.

DMRC Managing Director Mangu Singh at the joint media event in New Delhi mentioned Uber had won a "competitive bid" to expand the Public Transport feature across 210 Delhi Metro stations -- out of its 274 stations.

In the past, DMRC hosted a pilot project to experiment last-mile connectivity for Delhi Metro commuters in partnership with Uber and Ola and established kiosks at the Dwarka Sec-21 and Rajiv Chowk Metro stations. The organisation, however, ultimately picked Uber alone. It is set to allot designated space for parking Uber vehicles and offer a place from where riders will get information regarding their cab booking status and view the location of their already booked cabs, Singh noted.

Uber also showcased a 'model Metro station' at the event that includes dedicated pick-up and drop-off areas along with services such as UberGo, Pool, Moto, and Auto as well as the Wheelchair Accessible Vehicles (WAV) and Uber Bus.

That being said, the present development is limited to the Public Transport feature that is already live in eight cities worldwide, including Denver, Boston, Chicago, Washington DC, and San Francisco in the US; London and Paris in the UK; and Sydney in the Australia.

The Public Transport feature on the Uber app works quite similar to the Public Transit option available on Google Maps. However, Google's offering lets users even book Uber and Ola cabs. The search giant also in the recent past enhanced the Maps app with an Auto Rickshaw Public Transport Mode and voice navigation for public transportation.

"India is a fundamental market for Uber," said Dara Khosrowshahi, CEO, Uber, while addressing the media at the event. "We think that it's a big market and would help us bring innovations."

Uber is also bullish on utilising Indian talent to export its developments to global markets and double down its headcount in the country. Nonetheless, the company often faces concerns over safety issues.