This is Uber's Answer To Ola Play, Coming Soon to a Cab Near You 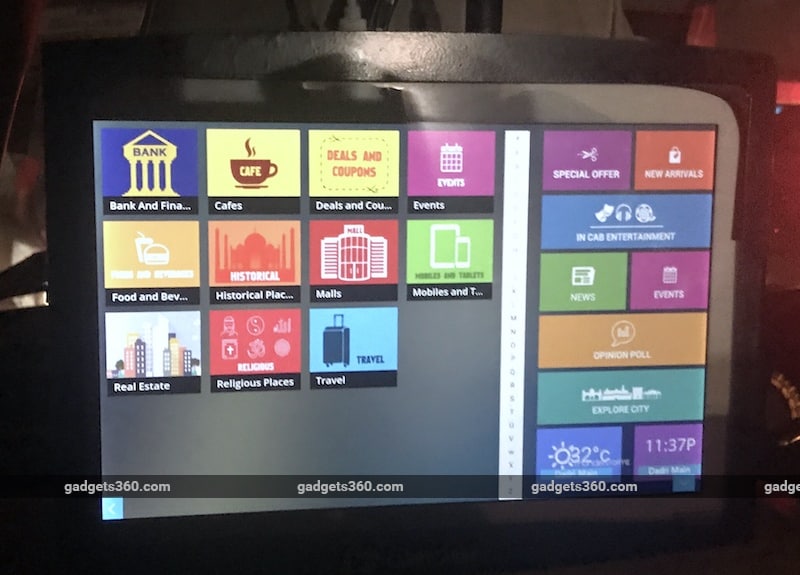 Uber is taking a page out of Ola's playbook as it pushes to expand business in India, its largest overseas market. Months after its Indian rival introduced its "connected platform" called Ola Play, Uber is set to launch its own infotainment system across several of its cab tiers in the country, people familiar with the matter have told Gadgets 360.

The company began testing its infotainment system -- an Android tablet that comes loaded with a range of services -- in select cities in the country earlier this year. The ride-hailing service now plans to install the tablet on several of its premium cabs including its Uber X fleet, and make it available for passengers in select circles later this year, people said.

Uber has been inviting select drivers in New Delhi and other cities to install an HD screen-enabled tablet, according to a source and two drivers who spoke on the condition of anonymity.

This is the first time Uber is planning to bring an actual tablet to its cabs in any of the markets where it operates. The company currently offers Uber Trip Experiences in select markets where it lets passengers consume a range of services using their own phone.

In the United States, for instance, Uber offers passengers access to Pandora and Spotify Premium from within the Uber app. Other major services that passengers have access to include Cupper, which lets them find coffee spots near their destination, and access to the Washington Post content for the duration of the Uber ride.

For its infotainment systems in India, Uber has partnered with Pune-based firm Cabby Tabby, one person said. The tablet comes with a range of services, including Hungama apps for music and movies, The Viral Fever (TVF) app for comic content, and Scoop Whoop app which also has comic and original shows, as seen by Gadgets 360. Cabby Tabby isn't an exclusive partner for the infotainment system project, a source familiar with the matter said.

The infotainment system also offers guides on weather, mapping service, and listings of popular sightseeing places including temples, parks, movie theatres and malls along with their corresponding contact details. The tablet also has an app to keep a tab on real-time status of flights. Also bundled in the infotainment system is a coupons section that lets people unlock several local deals on various different services, a feature that could serve as a tiny revenue model for Uber. Details of the companies Uber has partnered with to power this content remain unclear at this stage.

"Frankly, when you're in a two-horse race - as Uber seems to be in India with Ola - you often have to mimic your competitor to keep up, so it's not all that surprising," Jan Dawson, founder and chief analyst at Jackdaw Research told Gadgets 360. "But it's also an example of Uber doing something market-specific, which I suspect we'll see more of as it competes in some of these countries."

As part of enriching cab experience, Uber has also instructed drivers to carry newspapers everyday, and offer it to passengers should they ask for one, said two drivers who have been briefed about the plan.

An Uber spokesperson told Gadgets 360 that the company is "constantly innovating and testing out new ideas to improve the rider and driver experience," but added that there are "no developments around plans for in-car infotainment systems at this time."

"We have been introducing and improving a host of features both on the driver and rider facing applications since we began our journey in India," the spokesperson said in a statement.

It remains unclear if the company plans to add more services to the infotainment system before it officially launches it to the public. At the current stage, its infotainment system lacks a range of features that rival Ola offers to its premium cabs with Ola Play service.

Ola Play, which as of earlier this month has been installed on more than 50,000 Prime Play cars across seven cities in India, offers Apple Music, BookMyShow, videos from comedy group AIB, and Eros Now for now and other content services.

However, there is more to Ola Play than that. A passenger can, for instance, change the radio channel, control the volume of the infotainment system. The company has also piloted a new feature that lets passengers control the air conditioning with a tap on the tablet, a person familiar with the matter told Gadgets 360.

In the coming months, Ola plans to allow passengers to pre-book popcorn for their movies, and introduce the ability to check-in for a flight while passengers are on their way to the airport, a person familiar with the matter said. Ola has also opened Ola Play service to developers, allowing them to come up with interesting, local solutions to add more value to its connected car platform.

The bet on tablets
Sanchit Gogia, chief analyst at research firm Greyhound, commended both companies' efforts with their infotainment projects, but he wasn't impressed with the way either of the companies are approaching the concept.

"Why tablets?" he wondered as he spoke to Gadgets 360. "Customers already have a smartphone or a tablet with them that have a plethora of content they like," he said.

Gogia cited the example of airline Jet Airways that offers its passengers a range of services including content through its own app when they fly.

"That's probably the right way to go about it," he said, adding return of investment on putting so much money on these tablets -- which will require maintenance, firmware updates, and the content catalog to be refreshed every few days -- is likely too high and could hinder its scale, he added.

Analyst Dawson, however, suggested that in India, where connectivity is still a problem, tablets are the right solution. But he agreed that in developed markets, people's phones are good enough.

"It feels like a particularly good fit for markets where mobile broadband is slow or expensive and therefore people might not have their own entertainment options with them. In most mature markets, people would simply use their own smartphones for this sort of thing," he said.