Twitterrific for Mac Rises From the Dead, Now Available via App Store 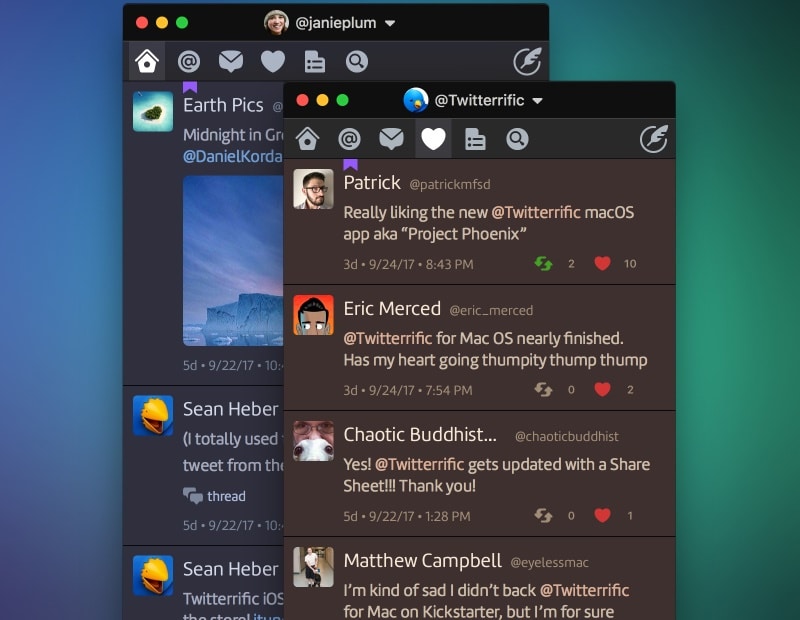 Twitterrific, our favourite Twitter client on iOS, is back from the dead on macOS, as developer The Iconfactory has announced the availability of Twitterrific 5 via the Mac App Store. The launch delivers on the promise of February's 'Project Phoenix' Kickstarter that touted the return of an updated Twitter client on the Mac, a venture that had found over 2,850 backers and raised over $100,000 on the crowd-funding site.

Twitter 5 for macOS comes with features you'd expect from a modern-day Twitter client for Mac like multi-account, multi-timeline support; support for Notification Centre and Retina displays; built-in sharing controls; full-screen mode; and, of course, a dark theme. The app can also sync your reading position with its iOS counterpart, which means you can continue where you left-off.

Like other third-party Twitter clients, Twitterrific promises a Twitter experience that's without "promoted tweets" and "while you were away" tweets that can get pretty annoying. The one feature that the app is missing right now on macOS is the Today tab that we love on Twitterrific for iOS, and we hope that it gets added soon with an update.

Twitterrific was the first native Twitter client on macOS, and though a Mac version has been available all this while, its development fell behind its iOS counterpart. The Kickstarter project provided the developers an incentive to focus on the Mac version once again, and the result is Twitterrific 5, which is now available as a $19.99 (Rs. 1,600 in India) purchase via the Mac App Store.

iPhone 8, iPhone 8 Plus Available With Up to Rs. 15,000 Cashback on Paytm
The Elder Scrolls V: Skyrim for Nintendo Switch India Price Revealed