Quote Tweet with reaction feature is currently being tested on iOS only. 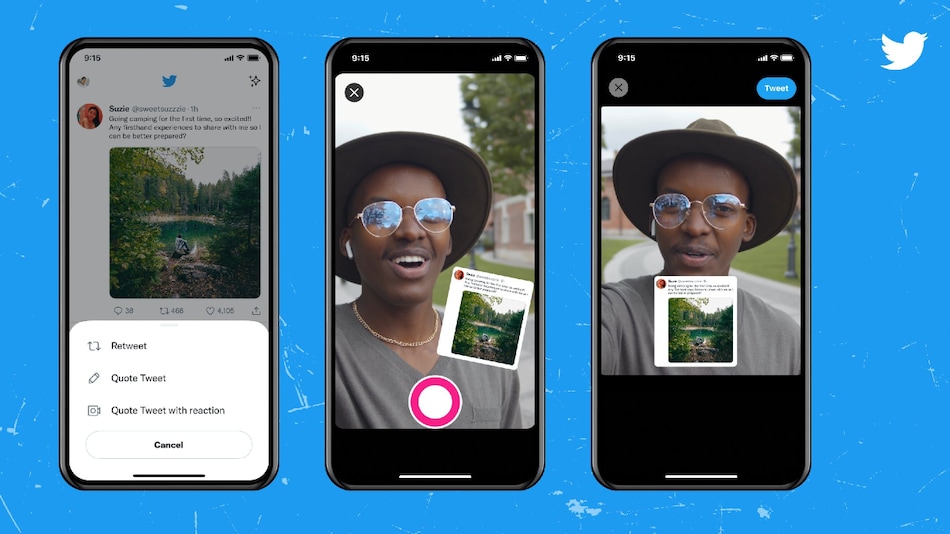 Twitter is getting a TikTok feature that will let users react to tweets with photos and videos. The microblogging platform has started testing a new 'Quote Tweet with reaction' feature that allows users to post video reactions to tweets alongside the tweet embedded. Users can tap on the 'Quote tweet with reaction' icon from the Retweet menu. By tapping on it, they will be able to react to a tweet with an image or video with the original tweet embedded. Twitter is calling these reaction videos or photos Tweet Takes. This functionality is similar to TikTok's video replies. Twitter confirmed that the new feature is currently being tested on iOS.

The Twitter Support team on January 7 tweeted about testing of the new feature. As mentioned, users can share customised reaction videos for tweets with a 'Quote Tweet with reaction' option while retweeting. When a user clicks on the option, it will take them to a screen where they can add a photo or video with the tweet embedded from their device library or make one. Additionally, a Twitter official has posted a reaction quote tweet to demonstrate the feature.

The launch of ‘Quote Tweet with reaction' comes around five months after the company had announced the closure of a similar feature—Fleets. Fleets were similar to Instagram Stories and allowed users to share their tweets with screenshots, photographs, or videos from their gallery. The Fleet, much like Instagram Stories, was set to disappear after 24 hours. Twitter has shut down its Fleets in August last year, eight months after it was launched. The company said that it didn't see an increase in the number of new people joining the conversation with Fleets as they hoped.

Since then, the microblogging website has been adding many new features to rival TikTok, Clubhouse, and Meta-owned social media platforms. Recently, Twitter has rolled out a TikTok-like Explore tab for users in a limited number of countries. The tab helps users to quickly check out the top trending content on the platform. With this, users can swipe up to see videos, images, and text-based tweets in a vertical fashion on the platform.