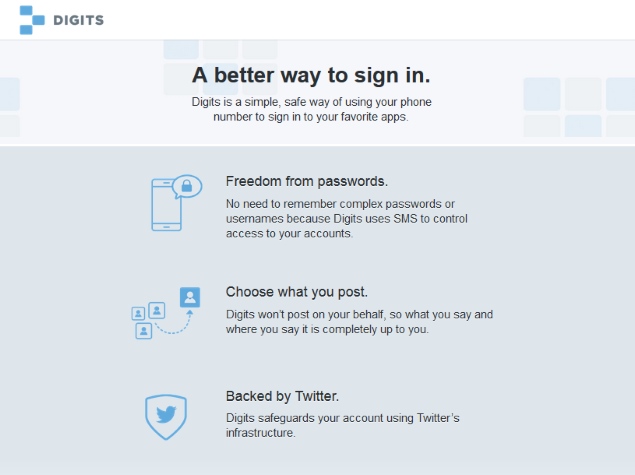 Twitter formally declared war on passwords during a developers' conference in San Francisco, unveiling a new system that allows users to log in to mobile apps with a phone number.

With Digits, which is not part of Twitter, the user types in the phone number and receives a one-time confirmation number via text (SMS).

Seibert is convinced that the system is better than the combination of email address and password, which, he said, is easy to forget, often difficult to key in on mobile phones, and exposed to identity theft.

Cameron Hendrix, a mobile-apps developer for a digital education firm in New York, described Digits as "more secure" than the current password-based system.

Making the announcement on the company's blog, Twitter Product Manager Michael Ducker said, "We built Digits after doing extensive research around the world about how people use their smartphones. What we found was that first-time Internet users in places like Jakarta, Mumbai and Sao Paulo were primarily using a phone number to identify themselves to their friends. But until Digits, there has been no simple way for app developers to integrate phone-based sign-up and sign-in to your apps."

Ducker adds, "All users have to do is enter their phone number, and Digits will send a confirmation code to verify the number. There's no need to remember complex passwords or usernames. To top it off, Digits won't post on behalf of any social network."