IPL 2020 was the most-tweeted-about sports event and Mirzapur 2 the most popular web series. 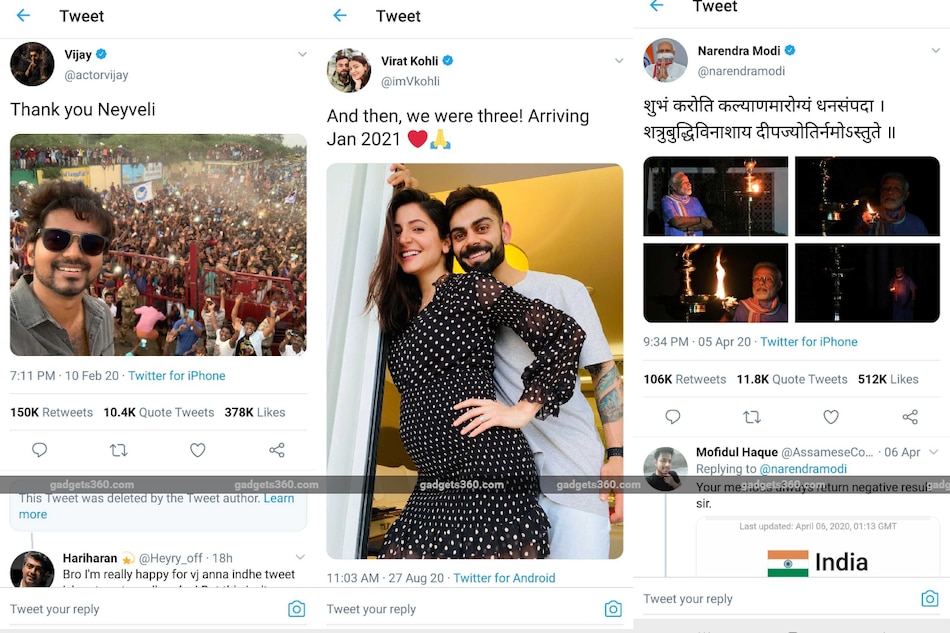 Twitter says there was an equivalent of over 7,000 tweets per minute about TV and movies this year globally. Conversations about #COVID19, tributes to #SushantSinghRajput, and tweets about #Hathras made it to the most tweeted hashtags in current affairs. #IPL2020 and #DilBechara emerged as the top sports and movie hashtags, while #Binod became the most tweeted meme of 2020. Twitter adds that #Ramayan, #Pokiri, and #Mahabharat made a comeback as nostalgia conversations this year, while interests such as #Photography, #Yoga, and #Poetry were widely discussed on the platform. Big Boss was the most tweeted about reality show this year

This year also brought a sense of gratitude for our frontline workers, says Twitter. Tweets expressing being grateful or thankful increased by 20 percent globally, with particular recognition of doctors (+135 percent) and teachers (+30 percent). Twitter says it has announced these accolades based on data identified from January 1 to November 15.

Tamil actor Vijay's selfie was the “most retweeted tweet of 2020”. The actor had tweeted a selfie of him and his fans in Neyveli back in February. At the time of writing this piece, it had over 1,49,000 retweets.

The most retweeted tweet in politics was Prime Minister Narendra Modi's tweet wherein he asked citizens of India to “light lamps of hope and good health” to thank COVID-19 frontline workers. PM Modi had asked people to also do this as a symbolic gesture of solidarity towards one other.

Indian cricketer MS Dhoni's tweet thanking Modi for sending him a letter that appreciated his achievements and contribution to cricket in India was the ‘most retweeted tweet in 2020 in sports'.

An Artist,Soldier and Sportsperson what they crave for is appreciation, that their hard work and sacrifice is getting noticed and appreciated by everyone.thanks PM @narendramodi for your appreciation and good wishes. pic.twitter.com/T0naCT7mO7

In the business category, Chairman of Tata Trusts, Ratan Tata's tweet to announce a commitment of Rs. 500 crores on behalf of the company towards protecting and empowering communities affected by the pandemic were the ‘most retweeted in the business category'. The tweet has over 58,000 retweets.

The COVID 19 crisis is one of the toughest challenges we will face as a race. The Tata Trusts and the Tata group companies have in the past risen to the needs of the nation. At this moment, the need of the hour is greater than any other time. pic.twitter.com/y6jzHxUafM

Indian cricketer Virat Kohli's celebratory tweet announcing his wife Anushka Sharma's pregnancy was the ‘most liked tweet of 2020'. Sharma also took to Twitter to announce the same news, and it is also in the five most-liked tweets of the year. At the time of writing this report, Kohli's tweet has over 6,44,000 likes.

Actor Amitabh Bachchan's tweet sharing his news of becoming COVID-19 positive was the ‘most quoted tweet of 2020'. In his tweet, he had requested people who had come in contact with him to get tested, spreading awareness about the virus. Twitter says that those that quote-tweeted his tweet wished him a speedy recovery and encouraged people to stay safe, wash their hands, and wear their masks.

T 3590 -I have tested CoviD positive .. shifted to Hospital .. hospital informing authorities .. family and staff undergone tests , results awaited ..
All that have been in close proximity to me in the last 10 days are requested to please get themselves tested !

Twitter says the most tweeted meme in India this year was #Binod, and a mention of “Binod” in a video by Slayy Point set off this meme. After that, creators, brands, and even the police jumped in on the conversation, changing their profile names and tweeting videos and pictures. Here are some of those tweets.

Dear #binod , we hope your name is not your online password. It's pretty viral, change it now! #OnlineSafety