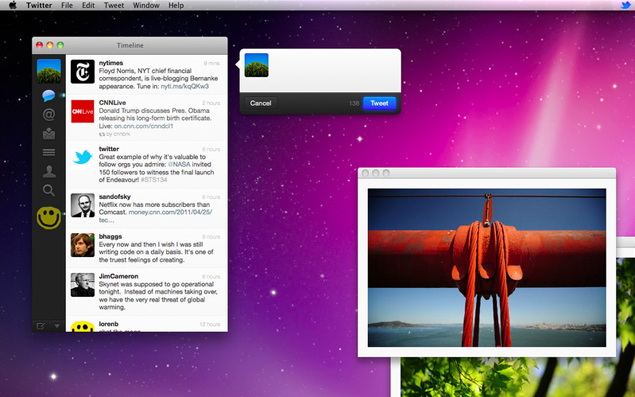 If rumours are to believed, then Twitter fans will be disappointed to learn that the microblogging site has decided to cancel all future updates for Twitter for Mac. TechCrunch columnist MG Siegler tweeted the news saying, "Word is that Twitter made the call today: Twitter for Mac is done. They won't kill it outright, but no further updates. Goodbye, old friend."

There is still no official confirmation about the news from Twitter yet. Some users may have noted that Twitter still hasn't updated Twitter for Mac to support the new Retina MacBook Pro and also denied the application to Mountain Lion's new notification system. 9to5Mac further reports that a Retina version of the Mac client was ready but never made it officially.

The latest update to Twitter for Mac dates back to 1 June 2011. Version 2.1.1 brought along the ability to view photos uploaded to Twitter.

Eventually if Twitter plans to kill its Mac counterpart, then users may resort to other third-party apps like TweetBot,which recently entered the beta stage and is expected to launch in its final form in the next few months. The application will be available to all users once it hits the App Store.

What about TweetDeck? Another popular Twitter client, which has received updates in the recent past, may be another option for users. But will it garner the support of Twitter users more inclined to Twitter for Mac? That's a story for a different day.

Word is that Twitter made the call today: Twitter for Mac is done. They won't kill it outright, but no further updates. Goodbye, old friend.