Twitter seems to be rolling-out a couple of new features for its iOS app to enhance the attachment sharing and video viewing experience for users. While Twitter has not officially announced the latter of the two features, it appears to have already rolled-out to a large number of users based on media reports.

As part of a collaborative promotion for ABC network's new TV sitcom, Selfie, the television network and Twitter on Wednesday announced a new feature that would let users attach the first full episode of the show, which shows up as an attachment suggestion when users insert the #SelfieABC hashtag in their original tweet. An example of the #SelfieABC attachment can be seen on the @SelfieABC handle.

The announcement reads, "For the first time ever, Twitter users can attach a full-length TV episode with a tweet and watch it using the Twitter video card." 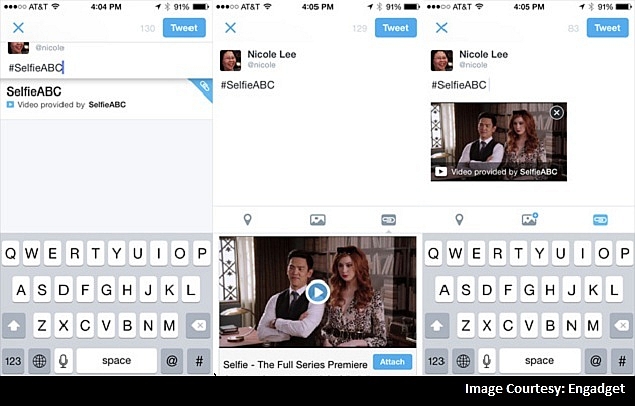 While for now the feature has not been seen to work with other hashtags, it is speculated Twitter will soon enable the hashtag-based attachment suggestion to suggest images and videos. As seen with the #SelfieABC hashtag, iOS users will have the option to go ahead and attach the Twitter attachment suggestion by clicking the 'attach' button, or just ignore it.

"In addition to being able to watch the full episode of "Selfie" within a Tweet from the official "Selfie" Twitter handle, @SelfieABC, Twitter users, on their iOS devices, can compose their own original Tweet and use the hashtag, #SelfieABC, to render a video of the full first episode that can instantly be tweeted and shared virally from the social media platform," confirmed the official post on the ABCmedianet website.

The second, new mini player feature for the Twitter iOS app has not yet been announced by the company, but has been spotted in action by a number of publications. However, Twitter may still decide not to roll out the feature being tested. The new mini player within the Twitter iOS app can be minimised to let users continue watching a tweet-embedded video while browsing other tweets on their timeline in the background. Such functionality can be already seen with the YouTube app.

Just seen how Twitter now allows you to watch videos in your timeline while still browsing, this is awesome pic.twitter.com/yuiN5qvau1

The feature was first spotted by a Twitter user named Neal Mann, who tweeted, "Just seen how Twitter now allows you to watch videos in your timeline while still browsing, this is awesome".

The Next Web states that the update is only for those videos which use the microblogging site's native in-app video player. Videos from YouTube, Vine or other sources are not supported as of now, and will continue to play with Twitter's normal Player Card.

Users can experience the minimise feature by playing a compatible embedded video, which opens in the full screen interface, and navigating to the 'minimise player' option from the bottom right-hand corner of the screen. In full screen, the new mini player will also show reply, retweet, and favourite shortcuts below the video. The Next Web has kindly provided links to tweets with compatible videos (1, 2, 3), and you can try these out in the iOS app.