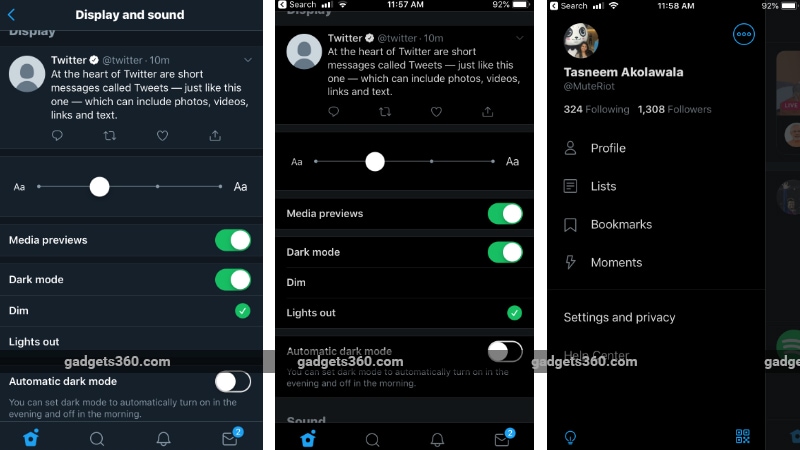 Twitter gets new darker ‘Lights Out’ option in Dark Mode

Twitter rolled out Dark Mode for Android and iOS users a while back, and now it's bringing a new additional ‘Lights Out' option to iOS. The new ‘black-coloured' dark mode option called Lights Out is now rolling out for iOS users. This option needs to be enabled, and it brings a black palate to the app, which puts even less strain on the eyes. It will be made available for Android soon. Furthermore, Twitter has also finally rolled out the automatic dark mode switch for iOS users, something that was already rolled out to Android users two years ago.

Twitter made these announcements on its own platform, stating the rollout has already begun. If you own an iOS device, head to the App Store to update the Twitter app to the latest version. Once you update it, open the app, hit the Profile button on top >Settings and Privacy > Display and Sound >Dark Mode > Lights Out. There are two options now in Dark Mode – Dim and Lights Out. Choosing Lights Out will enable the darker black-coloured theme. Dim mode is the blue-and-grey palate that was earlier the default dark mode option on Twitter. Users can switch between the two to decide which one they like best. Lights Out will be made available for Android soon, Twitter added.

As mentioned, Twitter has also announced that Automatic Dark Mode feature is also rolling out for iOS users. Twitter says that the app will adapt to the different environments you're in throughout the day, and not only will it switch from am to pm, but it will adapt to your location/ time-zone as well. This feature has been available for Android users since 2017.

Twitter says that there's also a quick access gesture for dark mode. “While it's still available in Settings, you can also swipe right and hold down the light bulb icon at the bottom to access dark mode, adjust your themes, and turn on/off automatic dark mode!”

We were able to spot the new changes on our Twitter iOS app. As others have pointed out, closing and reopening the app brought about the change, after updating to the latest version. It could be a phased roll out, and all users should see the new options in the coming days.

NASA Has Awkward History With Women in Space
Stalker 2 Gets 2021 Release Date, a New Website