Fleets, audio tweets, and audio spaces are part of Twitter’s efforts to make it easier for people to engage on the platform.

Twitter is rolling out Fleets globally, after initially testing the feature in India, Brazil, Italy, and South Korea. Twitter did not share any numbers for usage of the feature, but Joshua Harris, Twitter's Director of Design, said in a virtual press conference that Fleets have been useful in making people more comfortable on the platform. “We've seen Fleets helped people feel more comfortable sharing personal and casual thoughts, opinions, and feelings.” Aside from the Fleets rollout, Twitter also talked about Audio Spaces, an upcoming feature that it will be testing with a limited set of users, which will allow them to hold discussions in a public, yet intimate setting where they can control who is able to participate.

“A lot of people don't tweet. With retweets and replies, it feels like a burden to tweet. People lurk, draft tweets, and then do not send them,” Harris said. “Fleets create a lower pressure way to join the conversation. It'll make people more comfortable to join the conversation, because it's just for a day, and it won't be around forever. We've also seen more people joining conversations on Twitter, and we've seen that people new to Twitter are more comfortable.”

Fleets launched in India in June and while Twitter says it sees more people engaging with the platform, at least anecdotally, we've seen the usage of the feature go down in the interim. While the feature is ephemeral, and displays in a separate feed on top of the timeline that Twitter refers to as the Fleetline, there's nothing stopping others from taking screenshots of your fleets, and users don't even get notified. You also can't control who can see your fleets — these are features that Harris said the company is considering, but in the more immediate roadmap, Twitter will be adding stickers, more creator tools, and live broadcasting, he said.

Aside from Fleets, Twitter also showed a glimpse of an upcoming feature it calls Audio Spaces, which is a voice chatroom. Maya Patterson, a Product Designer at Twitter, explained that the new feature is meant to create a safe space for intimate conversations in public. 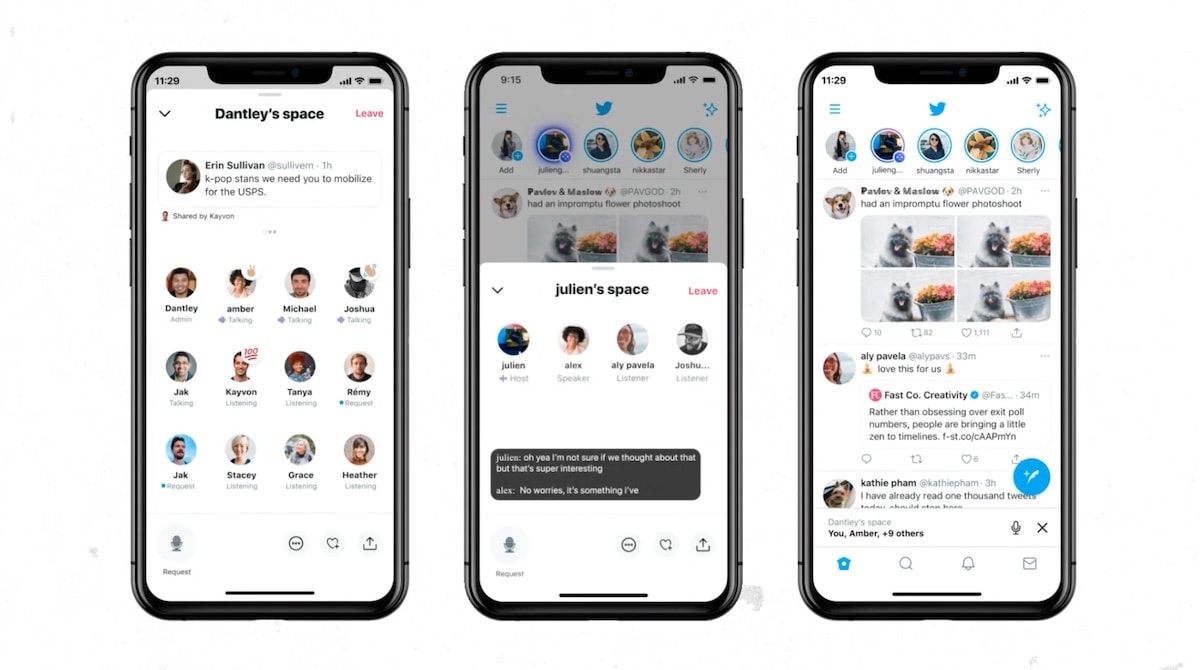 “Voice tweets allow people to share their thoughts, but we imagined a live audio space to communicate with one other person or small groups,” Patterson said. “A space that feels very safe and intimate. We've used the metaphor of a well-hosted dinner party. You don't need to know everyone at the party to have a good time, but everyone should feel comfortable to sit at the table.”

“Safety is critical and we need to get that right in order for people to leverage live audio spaces, so we're going to launch this first experiment to a very small group of people, who are disproportionately impacted by harm on the platform — women and people from marginalised communities — and the team is interested and the company is interested in hearing first from this group of people on their feedback on audio spaces,” she added.

The feature will not just be a voice chatroom though — according to Patterson, users will be able to add tweets, and view transcriptions in these spaces, so that it can be used in a number of ways.

Audio Spaces will roll out to select groups first for testing and feedback before a wider rollout. Patterson also said that Voice DMs are being tested by the company, and added that voice tweets and all media will soon get transcriptions to improve accessibility on Twitter.

The team also said that the voice tweets feature is coming to Android but did not share further details, except to say that they're working hard to make that happen.

These new features come as a part of Twitter's attempts to make the platform more accessible to new users, although a more cynical view would be that the company is playing catch-up to others. The stories feature has been a feature of almost all platforms by now — even LinkedIn! — and voice chatrooms have also been growing in number since the launch of Clubhouse.

Further reading: Twitter, Fleets, audio spaces, voice tweets
Gopal Sathe Email Gopal Gopal Sathe is the Editor of Gadgets 360. He has covered technology for 15 years. He has written about data use and privacy, and its use in politics. He has also written extensively about the latest devices, video games, and startups in India. Write to gopal@ndtv.com or get in touch on Twitter through his handle @gopalsathe with tips. More
Samsung Galaxy S21+ Alleged Geekbench Listing Shows Snapdragon 875 SoC, Outperforms Exynos Variant
Samsung Galaxy M42 Battery Surfaces on 3C Certification Site, Receives BIS Certification: Report