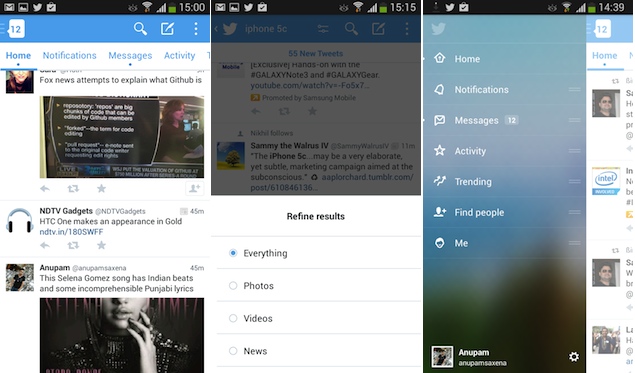 It looks like Twitter's native Android app is all set to get a big redesign.

A new Twitter for Android beta available to users who have signed up for Twitter's beta testing program sports a completely new design and functions a little differently from the most recent stable version of the app.

The beta app features seven swipe-able tabs instead of four, adding new tabs for Messages, Activity and Find People to the existing Home, Notifications, Trending and Me tabs. Also, worth pointing out is that these tabs are not represented by icons but with text, giving the app an even more minimalist look.

The Activity tab keeps a track of what users who you follow are reading, favouriting and retweeting, and which users they're following. The Find People tab offers friends suggestions recommending people with common interests and connections, you could follow.

The app also features a sliding pane at the left hand, that some people also call the Hamburger menu. This pane offers quick access to all the tabs and sports the user's blurred profile header image as the background. The different tabs on this menu also display the number of unread messages or notifications.

The app also offers new features like in-line media previews displaying previews of content such as images in the timeline, similar to some third-party apps. There's a new search filter button as well, which allows users to quickly refine search results choosing between filters like Photos, Videos, News, People, People you follow, and even based on location of the tweet (Nearby).

Some features such as 'mark all direct messages as read' are missing from the beta app, though. However, as this is just a test app, the final version could be different and could include the missing features.

Twitter also posted() on its blog that it tests several features with small groups of its 200 million users before determining what it releases and that it often experiments with features that may never be released to everyone who uses Twitter. It also mentions that it could selectively roll out features. It says," You may see some features that your friend doesn't see, or vice versa. This is all in service of making Twitter the best it can be."
Comments