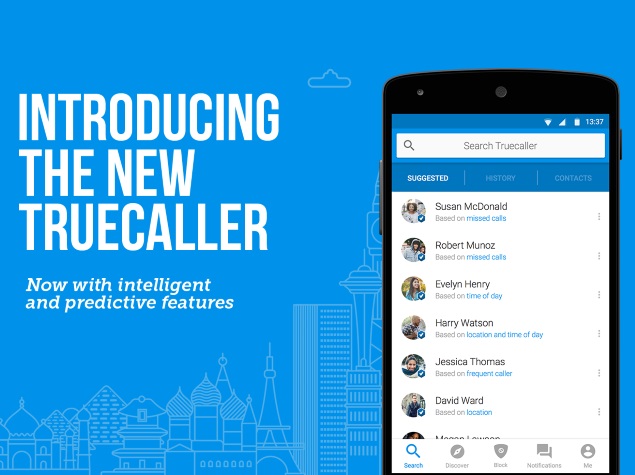 Truecaller 5.0 is now available to download from Google Play and is currently limited to Android users. Techcrunch claims that the company will be bringing the new smart features to iOS and Windows Phone apps by early 2015. "Our ambition is to have a congruent experience across all platforms, however certain features will be tailored depending on operating system guidelines with the devices," a spokesperson told Techcrunch.

The company also announced that it receives more than 1.5 billion search requests per month from its users. In a statement the company explains that the new Truecaller for Android has been fully revamped to "provide easier discovery and simpler navigation, and rebuilt to make it much lighter in terms memory consumption."

One of new features of the Truecaller 5.0 app for Android is Suggested Contacts, with the app predicting and suggesting whom to call or message based on call history, time, or location.

For example, if a user calls home before leaving from work at around 5pm, then the new Truecaller app will suggest the user to call home at that time and place. "The more you use it, the smarter it gets, and the app will eventually be able to help do the work of knowing who to call so you no longer have to scroll through unnecessary tabs," the company details.

The new update also brings Complete Contact Profiles, which keeps the phonebook updated with relevant details by adding social media profiles and images; and Smarter Search and Discovery, which can search within the contacts as well as names and numbers beyond the existing phonebook. The new Truecaller 5.0 app for Android now allows users to swipe right on any contact to call or left to text.

Commenting on the announcement, Alan Mamedi, Co-Founder and CEO of Truecaller said, "This is the first step we are taking to make Truecaller more intelligent and personal. We've made this advancement to save time for our users and make their lives less complicated when they want to get in touch with someone."