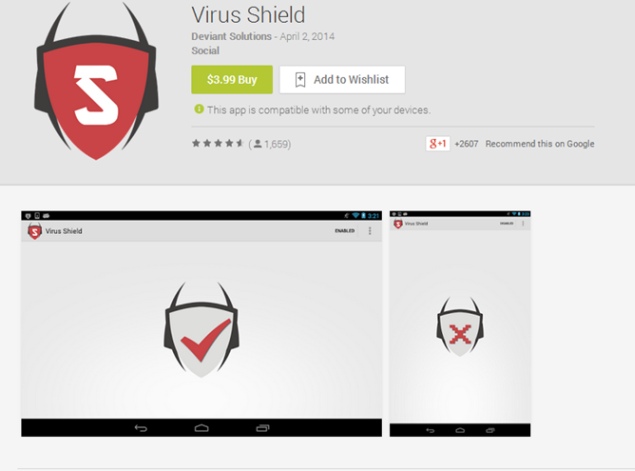 Android has developed a bit of a reputation for malware, so it's not too surprising that people want to protect their smartphones. Unfortunately, no one was watching the watchers, and the number one paid app on the Play Store was nothing but fake anti-virus software.

This highlights one of the big problems with mobile app stores, and while it's more obvious on Android, iOS isn't exempt from the criticism - in March the team behind the official Tor Browser said that a fake Tor Browser filled with adware and spyware was available on the iTunes App Store for several months before being finally removed.

Virus Shield, which is no longer available on the Play Store, launched about one week ago, for $3.99 (approximately Rs. 240) and was the top paid app. In the description, the app claimed to be preventing harmful apps from being installed; scanning apps, settings, files and media, and protecting your personal information. Add to that no advertisements, no permissions, and low impact on battery life, and you have thousands of users paying and downloading Virus Shield.

Except... the app didn't do anything at all. Most experts say that anti-virus software does nothing but provide the illusion of safety, and the Virus Shield developers clearly took that to heart - users who analysed the source code of the app learned that all it did was change an icon to tell you that your phone was insecure, but is now protected! The details are available on GitHub.

In a Google+ post, Chris DiBona, Director of Open Source at Google had in 2011 written about his scepticism of anti-virus software. He wrote:

No major cell phone has a 'virus' problem in the traditional sense that windows and some mac machines have seen. There have been some little things, but they haven't gotten very far due to the user sandboxing models and the nature of the underlying kernels.

No Linux desktop has a real virus problem.

Yes, virus companies are playing on your fears to try to sell you bs protection software for Android, RIM and IOS. They are charlatans and scammers. IF you work for a company selling virus protection for android, rim or IOS you should be ashamed of yourself.

If you read a report from a vendor that trys [sic] to sell you something based on protecting android, rim or ios [sic] from viruses they are also likely as not to be scammers and charlatans.

The Virus Shield developers played on thousands of users' fears - but it's hardly the only app that's misrepresenting itself on a mobile app store. The solution isn't in anti-viruses, but considering how tightly controlled the app stores are, we should expect Apple and Google to not fall for such obvious tricks at the very least.

Adobe Lightroom mobile for iPad now available for download
On World Health Day, here are the apps and gadgets you need