TikTok app now shows alongside a notice that reads, “Dear users, we are in the process of complying with the Government of India’s directive to block 59 apps.”

TikTok is one of the 59 Chinese apps banned in India

TikTok has now completely stopped working in India. After the Indian government imposed a ban on TikTok last night, the app was delisted from Google Play and App Store both soon after. However, it continued to work for those who had it already installed on their phone. Now, the TikTok app has completely stopped working on all devices, including the desktop website, and a user notice is displayed inside the app to inform users about the ban. Alongside, TikTok, 58 other Chinese apps have also been banned in the country.

The TikTok app now shows a network error alongside a notice that reads, “Dear users, we are in the process of complying with the Government of India's directive to block 59 apps. Ensuring the privacy and security of all our users in India remains our utmost priority.” The app now does not load new recommended videos, and instead shows a network error. The block seems to be done proactively by the company, to comply with the government directives, as a very similar notice on the Tiktok website has been signed off as TikTok India Team. The same notification was also sent to app users as a push notification.

The website has a message informing users of the ban, and notes that the developers are ‘working with the government to better understand the issue and explore a course of action.' At the time of writing, both the app and the website were completely down. 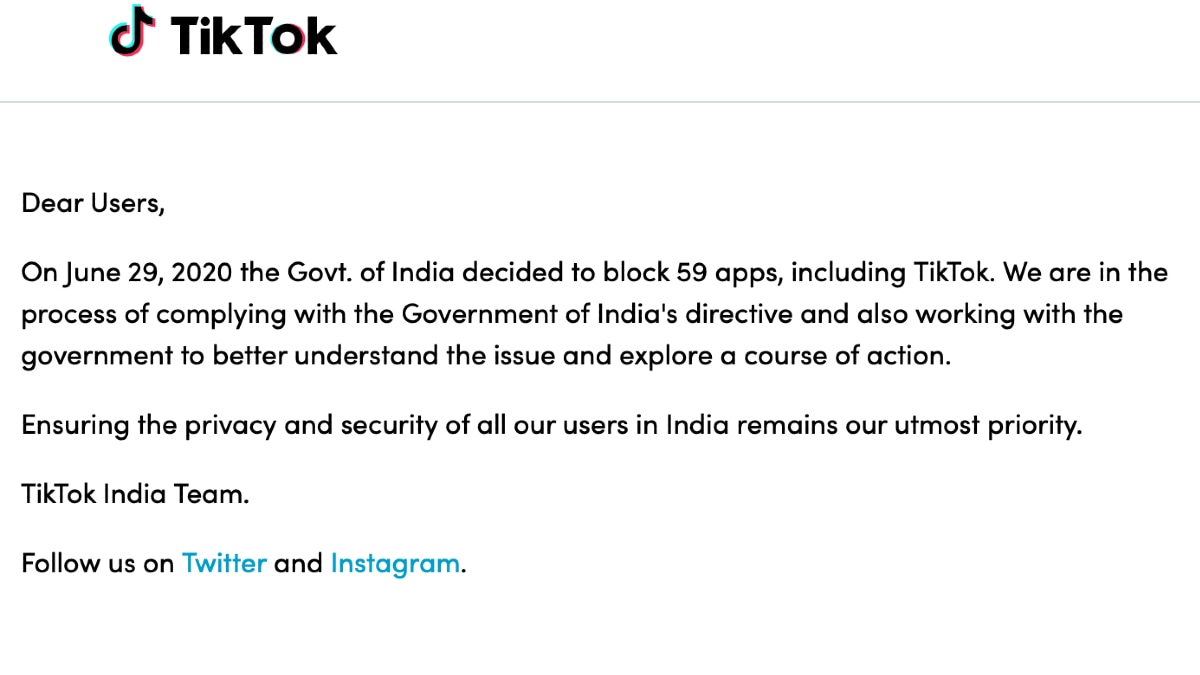 TikTok website has a message informing users of the ban

TikTok India head Nikhil Gandhi had earlier said that the company will meet with government authorities to discuss the issue and submit clarifications. However, according to sources, Information Technology Minister Ravi Shankar Prasad has no meeting lined up with the representatives of the banned apps.

The ByteDance-owned short video form app is claimed to comply with all privacy requirements, and that it does not share information with the Chinese government.

Apart from TikTok, the Indian government has also banned other Chinese apps including ShareIt, UC Browser, Shein, Club Factory, Clash of Kings, Helo, Mi Community, CamScanner, ES File Explorer, VMate, and more. The government claims that these apps are prejudicial to sovereignty and integrity of India, defence of India, security of state, and public order.

Further reading: TikTok, TikTok Offline, TikTok Ban, Chinese Apps Ban
Tasneem Akolawala Email Tasneem
Tasneem Akolawala is a Senior Reporter for Gadgets 360. Her reporting expertise encompasses smartphones, wearables, apps, social media, and the overall tech industry. She reports out of Mumbai, and also writes about the ups and downs in the Indian telecom sector. Tasneem can be reached on Twitter at @MuteRiot, and leads, tips, and releases can be sent to tasneema@ndtv.com. More
LinkedIn Users Ditch Polite Networking for Real Talk on US Race and Inequality
Google Photos App Gets Revamped Interface With Simplified Design and Map View