With profile videos, you can upload a video to your Telegram profile and choose a frame that you’d like to be featured as your static profile picture in chats.

Telegram has announced a new update that lets you add videos to your profile — alongside your existing profile photos. The messenger service's latest update also expanded the storage limit for sending media files from the existing 1.5GB to 2GB. It also carries a redesigned music player specifically for Android users. Additionally, Telegram users on its desktops have received the ability to sign in on up to three accounts simultaneously. The Telegram mobile app notably has had support for multiple accounts since December 2017.

Apart from profile videos, the updated Telegram app now lets you send media files of up to 2GB size. The app earlier supported up to 1.5GB files — that was still quite larger over the 16MB file size supported by WhatsApp.

Alongside detailing the new extended file size support, the Telegram team through a blog post took a dig at WhatsApp by calling its 16MB support “a totally random number.”

People Nearby update
For enhanced engagements within nearby users, the updated Telegram app has added the ability to show the distance of people contacting you via the People Nearby section. The app will also suggest you with a greeting sticker to begin your conversation. Having said that, it sounds a bit odd to communicate with strangers — no matter whether they're staying nearby or far away. 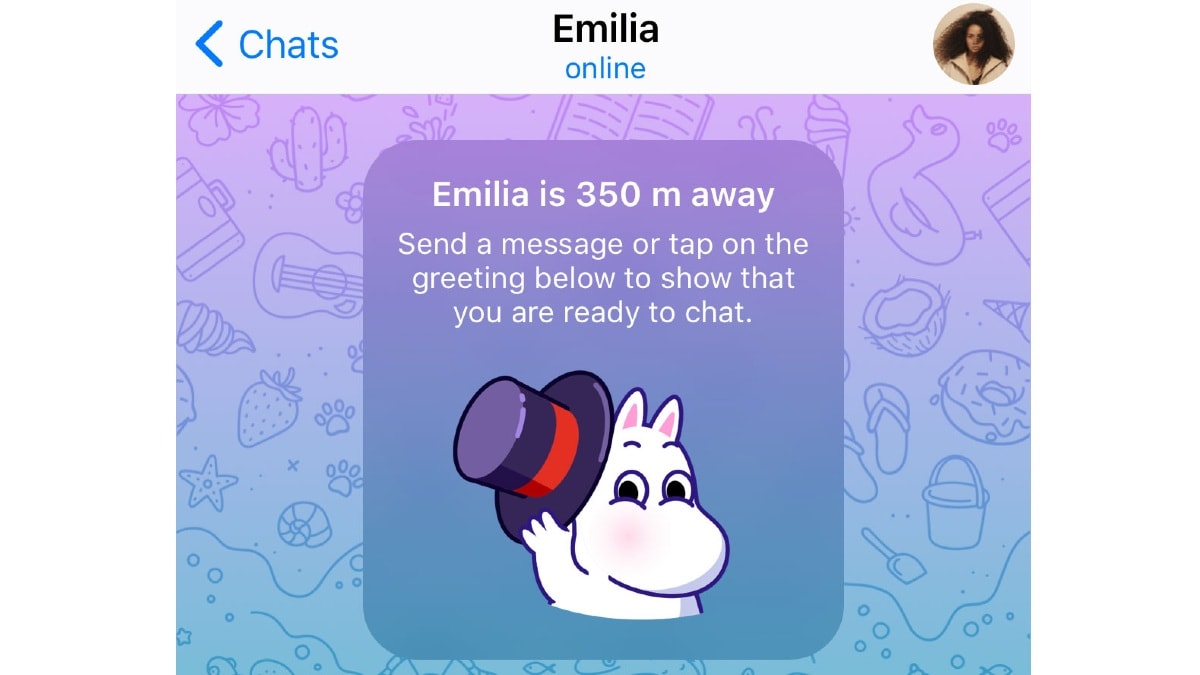 Telegram has also brought mini-thumbnails that give you an idea of what media is in a message directly from your notifications or message search results. The update also adds the option to let you filter chats from non-contacts and automatically archive and mute new changes from people who aren't in your contacts. You can do so by going to Privacy and Security settings of the app. Moreover, you can access the archived chats anytime from the Archive folder.

Group stats for groups with over 500 members
Specifically for people who own large groups with over 500 members, Telegram has added detailed graphs that give a glimpse at member activities and growth. Group stats also help owners view all top members in their groups and take a look at average message length. Further, there are also insights around engagements taking place on an hourly or weekly basis.

Telegram has also reduced its Channel Stats feature to channels with 500 members. Similarly, it is planning to bring access to group stats for admins of groups with at least 100 members in the coming days.

Redesigned music player for Android users; support for multiple accounts on desktop
The updated Telegram app for Android devices has received the redesigned music player that has new icons as well as an expandable track list. You can also control looping, shuffling, or even reverse a particular track order in a message. For videos, you can also crop and rotate them directly from the integrated video editor.

There are also several new animated emoji characters that you can pick for a new conversation on Telegram. Likewise, a football emoji has been added that animates the ball to the goal post.

Desktop users have also got the multiple account sign in option with the limit of adding up to three accounts from different phone numbers, without logging out. This is an extension to the multiple login support available for mobile users. Also, the feature is unlike the WhatsApp Web and desktop clients that both don't allow multiple logins.

You can download the updated Telegram on your Android phone directly from Google Play. The update has also been released with a similar list of changes for iPhone users that can be downloaded from Apple App Store. Furthermore, the updated desktop version is available for download from the Telegram site.