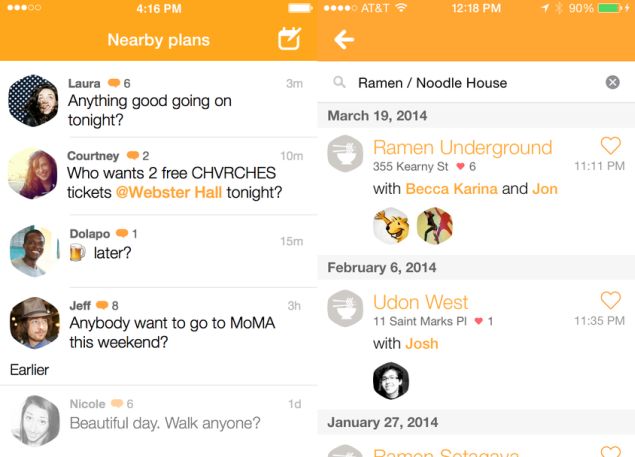 Location-sharing app Foursquare on Friday announced in a blog post that Swarm, a friend-focussed sharing app, is now available on Android and iOS. In the blog post, Foursquare said Windows Phone users will have to wait until "a bit later this summer" to get a taste of Swarm.

The only difference between the iOS and Android versions appears to be a battery life warning for Apple users. Swarm's App Store listing reads, "A note on battery - We've spent years developing the location technology that powers Swarm, making it extremely power efficient. But, as with all apps of this type, please note that continued use of GPS running in the background can dramatically decrease battery life." This note is absent from Swarm's Google Play listing.

The new app is a part of Foursquare's move to split into two apps - Foursquare and Swarm. While Foursquare now features just location discovery and sharing, Swarm lets you check-in, find friends in the vicinity and share what you are doing at a given place.

On Thursday, Foursquare had announced key features of the Swarm app. Neighbourhood sharing is one of the main features of Swarm. This lets you share what you are up to with those nearby. In case you want some privacy, the app lets you disable neighbourhood sharing from the home screen itself. Foursquare says Swarm is best used when you are looking for friends to join you on a particular activity. The firm says if you want to watch a film, you can use Swarm to find out which of your nearby friends are free, instead of texting them.

(Also see: Foursquare Details Key Features of Swarm App Ahead of Its Launch)

Foursquare built Swarm to make sure that you don't have to text your friends to find out where they are. In a separate blog post, Foursquare had said, "With Swarm, you can easily see which of your friends are out nearby, figure out who is up for grabbing a drink later, and share what you're up to (faster and more easily than you can in Foursquare today)."

The Foursquare app itself is in for a makeover on all smartphone platforms. A Foursquare blog post promised that the app would undergo a "metamorphosis" and that the company is going to be redesigning its local search feature.

According to the company, the redesigned Foursquare app will be able to answer questions like "which is the nearest gas station". The company said the new discovery-focussed Foursquare app is nearing completion and would be rolled out this summer.
Comments