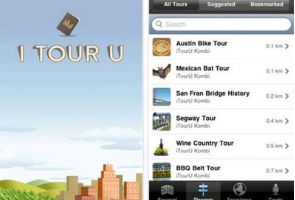 Highlights
Young Australian entrepreneur Andrew Dever has gone from being mortified to being inspired by his dad's penchant for taking him and school friends on colorful tours of their home city.

"I founded iTourU because when I was a boy I would come home from boarding school with friends and dad would drive us around Canberra for three hours giving them a tour," Dever told AFP on Tuesday.

"I would be embarrassed, convinced my friends would think me an idiot," he continued. "Years later, they all remember the stories that he told about those places."

The free iTourU application -- available at Apple's online AppStore -- taps into the location-sensing capabilities of iPhones to map people's locations as they record descriptions or stories.

Guides can add pictures or text messages to tours, which become available to other iTourU users. Travelers are led along a route mapped on their smartphones, with content matched to where they are.

"Internally, we like to say it's the not so lonely planet," Dever said in a playful reference to the popular Lonely Planet line of travel books.
Comments