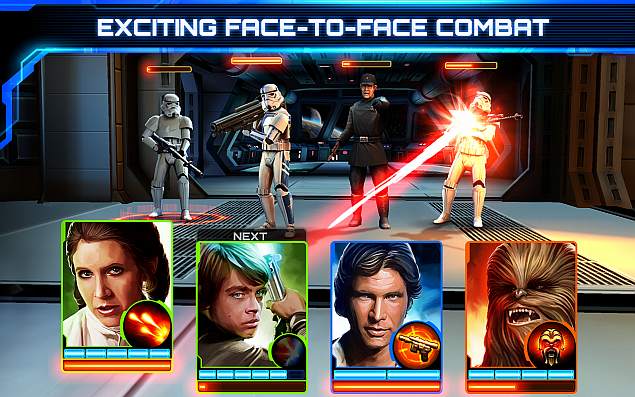 The game lets the users create their dream team with any Star Wars character including Luke Skywalker, Han Solo, Boba Fett, Chewbacca, Princess Leia and others and fight against enemies and other players.

Star Wars: Assault Team is a card-based game that comes under the strategy genre. The game's story is set between the Star Wars Episodes IV: A New Hope and Star Wars Episode V: The Empire Strikes Back. The combat-ridden missions make users travel to different plants like Tatooine, Kashyyyk, and more. Users can also train their Star Wars characters from the team and improve their special attacks.

The gaming app also includes some of the in-app purchases - Handful of Gems, Pile of Gems, Sack of Gems, Box of Gems, Crate of Gems and Pallet of Gems. According to LucasArts, the card-based Star Wars: Assault Team features 'cinematic' graphics, with full character and background animations during the PvP turn-based combat.

The app is a card-based game is seen receiving positive responses from the users from all the three OS app store listings for Star Wars: Assault Team. The game is currently available to download from Google Play Store, Apple iTunes Store and Windows Phone Store.

Alongside the release of Star Wars: Assault Team, Gameloft has released Captain America: The Winter Soldier for Android and iOS days before its movie version release. The game is not yet listed on the Windows Phone Store, though it had been announced for the platform.

Unfortunately, the 'demo version' on Android only lets users play two levels for free, after which users would have to go through some in-app purchases to continue. The iOS version of Captain America: The Winter Soldier however, is a paid $4.19 app, unlocked from the get-go.