Spotify Lite is now out of beta, and is available to download in 36 markets. 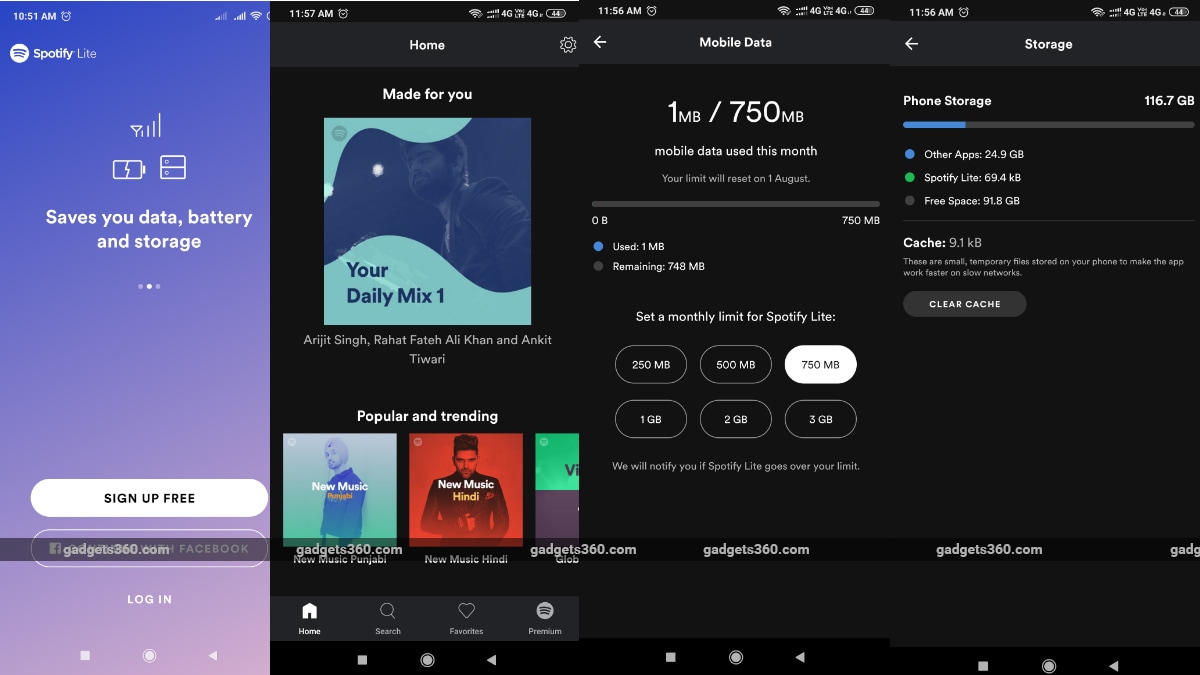 Spotify Lite is now available for download in India

Music streaming service Spotify has now launched a separate Spotify Lite app for Android users. Aimed at users with low storage, spotty connectivity, limited data plans, and older phones, the app is lightweight and comes with a data limit feature. With this, Spotify takes the same route as many other giants like Facebook, Tinder, Twitter, Ola, Skype, Instagram, and many more to widen its audience in developing markets like India. The beta version of Spotify Lite was launched in May this year, and now the app is available on Google Play as a free download.

Spotify Lite app is only a 10MB download, so it's a quick install and also loads quickly. The company says that the Spotify Lite app allows you to control your cache and clear it with a single trap. It also comes with the ability to set a data limit and get a notification when you reach it. It only runs on Android phones that are equipped with version 4.3 or higher. To recall, Spotify had launched its Lite app in beta in India back in May. The aim of the beta also including gauging user interest, and the company claims the interest was high. The app is now out of beta, and available to all users in India.

The Spotify Lite app comes with personalised playlists based on your hearing pattern, popular and trending playlists on the streaming app, and curated playlists made by editors at Spotify. The app is home to regional music like Punjabi, Tamil, and more. There are four tabs at the bottom – Home, Search, Favourites, and Premium.

The Search tab lets you search from the Spotify database and it even shows a list of genres like Pop, Bollywood, Romance, Punjabi, Party, Tamil, Pride, and more, for better discovery. There is a Favourites tab that lets you create a playlist, and see all your Favourite songs in one go. The premium tab is self-explanatory and it allows users to buy subscription for an ad-free experience. It also allows users to download songs to listen offline as well. New users get 30 days free trial, after which they will have to pay Rs. 119 per month. Overall, the Spotify Lite app is very similar to the vanilla app, design wise. In the Settings menu, the Spotify Lite app will show you the amount of data used, and lets you set a monthly data limit as well. The single tap Clear Cache button can also be found in Settings > Storage.

Amarjit Singh Batra, MD - India, Spotify, said in a statement, “We announced the availability of Spotify Lite Beta in India a couple of months ago to gauge user interest, which was high. As a result, Spotify Lite is now out of test mode, and available as an app for all users in the country. This small, fast app will make millions of free songs more accessible to anyone who may have an older mobile device, limited storage on their phones, are in poor internet connectivity areas, or just don't want to spend excess data on listening to music. We are committed to the long-term development of the music streaming industry, and the launch of Spotify Lite is another strong step in that direction."

Zoom Vulnerability Could Let Websites Turn on Your Mac's Cameras Without Permission
Realme 3i Set to Launch in India Alongside Realme X on July 15, Flipkart Reveals