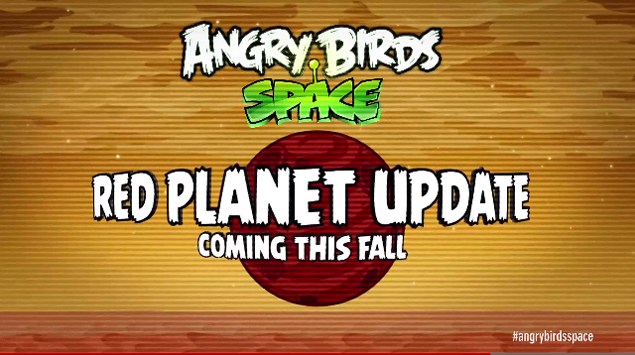 Amazing Alex garnered all the attention that Rovio needed from its latest project. While basking in the success of the physics-puzzle solving game, Rovio was also working on moving the space iteration of its feather flinging franchise forward.

So in case you're wondering what to do next after finishing the 20 Utopia levels in Angry Birds Space, Rovio has some news for you. Just at a time when the Mars rover Curiosity landed on the Red Planet, an update for Angry Birds Space is scheduled to set foot on your devices this fall.

Rovio has announced the update via a 30 second teaser of the game, which was released on 22 March 2012 in partnership with NASA. The video opens with a note saying," After travelling 352 million miles, the Curiosity Mars rover touches down on the Red Planet. What will it find?"

It then cuts to the footage of Mars where a bird's shadow is seen swooping across a patch of ice that spotted on the planet's surface.

Angry Birds Space was a huge hit evident from its 100 million downloads in just 76 days. Rovio has been working on the franchise to release updates for most games in the series. 15 new levels were added to the original Angry Birds while Angry Birds Rio got a major underwater physics update.

Formula 1-themed Angry Birds Heikki still continues with each level being unveiled at the time of the Formula 1 races across the world. The New Delhi track will be unlocked on 17 October 2012.

Last month, Rovio also hinted at a possible change in the bird-catapulting series, where users could get an opportunity to play as the pigs and defend the stolen eggs.