Snapchat Bets on Localisation, Opens Office in Mumbai to Expand India Base

The app has seen a 40 percent increase in daily active users (DAU) in India.

Snapchat is projected as an ultimate platform for 'real friends'

Snap, the makers of popular communication app dubbed Snapchat that has been competing against Facebook's Instagram for a long time, is set to expand its presence in India. The Santa Monica, California-based company has opened an office in Mumbai to boost its developments for the region. It is also in plans to bring new content creators as well as local publishers and media companies to offer relevant Lenses, Publisher Stories, and Shows through the platform.

"Our goal is to continue to introduce our products to the Indian population and make it increasingly more validated for the vibrant and rich tapestry of culture that exists within the country," says Jared Grusd, Chief Strategy Officer, Snap, in a telephonic conversation with Gadgets 360.

Grusd recently came to India to launch the Mumbai office. Snap chose Mumbai as the city for its first local place in the country with a view to sit alongside a list of media, entertainment, telco, content, and fashion companies, the executive tells Gadgets 360. But that isn't the company's first move in Mumbai.

Late last month, Snap hosted its Creator Summit in Mumbai where it brought over 80 attendees, including blogger Malini Agarwal of MissMalini.com as well as influencers such as Gaurav Gera, Awez Darbar, and Nagma Mirajkar. The Summit was designed to build a relationship with Indian content community. Also, it helped bring content creators on board that would help design experiences specifically for Indian users.

"One big aim for Snapchat in the Indian market is to increase the amount of cultural relevance we have within the overall community," emphasises Grusd. "In order to do that, there are many different things that we're trying to achieve."

Snap foresees that the addition of new languages would help Snapchat become a household name in India. A report released by Google last year reflects the importance of Indian languages for platforms like Snapchat by predicting that the Indian language Internet users will reach whopping 536 million by 2021.

But for Snap, localising language support is just one way to attract users in India. The company also has plans to make content on Snapchat more relevant for the Indian population and work closely with local content creators, influencers, celebrities, and brands to develop a plethora of offerings for the local users.

"We've created tools that allow friends to communicate with one another," says Grusd. "We open them up to various creators and content companies to use in order to create rich, exciting content for the platform."

To get started with new and existing partners, Snap in late April hired Durgesh Kaushik as the Head of Market Development for Snapchat in India. Kaushik, who previously worked at companies such as Facebook and Reliance Jio, has been assigned to lead market development activities in the country. Certainly, with the new office, the company is set to expand the India team by hiring new employees, too.

Snap is focusing on expanding strategic partnerships, building an engaged community of creators and users, and servicing local advertisers by hiring fresh talent in India.

"The most important thing for us is to ensure that we are relevant to the Indian market," underlines Grusd. "And in order to accommodate that, we need our products and our content to be relevant in the market."

Snap in the recent past launched its partnerships with JioSaavn and Gaana. Those partnerships enabled Snapchat users to share their favourite music tracks from the JioSaavn and Gaana apps. Further, the Shows section on Snapchat includes a news show from Brut India as well as FilterCopy from Pocket Aces, and Miss Malini's Beauty BFFs. There are also localised creative tools for major Indian holidays and festivals, such as Holi and Republic Day, and films such as Student of the Year 2.

"We will increase the number of partnerships we do in the region in order to ensure that the product remains culturally relevant and for deeper connections for friends to hang out with friends," says Grusd.

In April, Snap partnered with the Election Commission to help create awareness among Indian voters by launching tools and polling information. Grusd hints at the increase of such partnerships with Indian authorities over time.

"I think we always have like a great natural way of participating with authority because we care deeply about the issues that are many governments and many people around the world care about," he states.

The newer partnerships by Snap are projected to bring fresh experiences for users in India -- whether they would use lenses, filters, or simply surf the Discovery tab. The company is also largely investing in augmented reality (AR) -- some of the areas where it already gained huge popularity in the past.

Snap is bullish on growing its monetisation by expanding its India presence over time.

"The business model of Snapchat is to participate in the advertising community and to create a platform where marketers and advertisers work with us as part of our ecosystem in order to build a vibrant community," says Grusd. "And so over time, I think we will scale out the business model too."

VP International Claire Valoti in a separate emailed statement to Gadgets 360 specifies that Snap has received an "enthusiastic response" from advertisers and brand partners and created "existing AR activations" for leading consumer brands in India this year.

"We are excited to continue to support advertisers through our partnership with local reseller, Tyroo, and are also establishing a local Advertising Solutions team to work directly with some of our larger advertisers," she adds.

Why is India on Snap's radar now?
Snap wasn't focusing in India for quite some time. However, the company in April launched a 'rebuild' of its Android app that helped it see an "exciting trajectory" of its audience in the Indian market.

"Our relaunch Android application has given our opportunities to focus more on the Indian market, technically speaking, and allowed us to create an even more robust experience for the market," says Grusd. "And so we're really excited to do that now that we've relaunched that application."

While the exact number of Indian Snapchat users aka Snapchatters isn't public, Grusd underlines that the company has seen a 40 percent increase in daily active users (DAU) in India between the second quarter of 2018 and 2019.

"We're really encouraged by that momentum," he continues.

According to the statistics available on Statista, India is the sixth-largest country for Snapchat with a user base of over 15.1 million as of July this year. The US, on the other hand, dominates the global markets for the app with 97.55 million users. 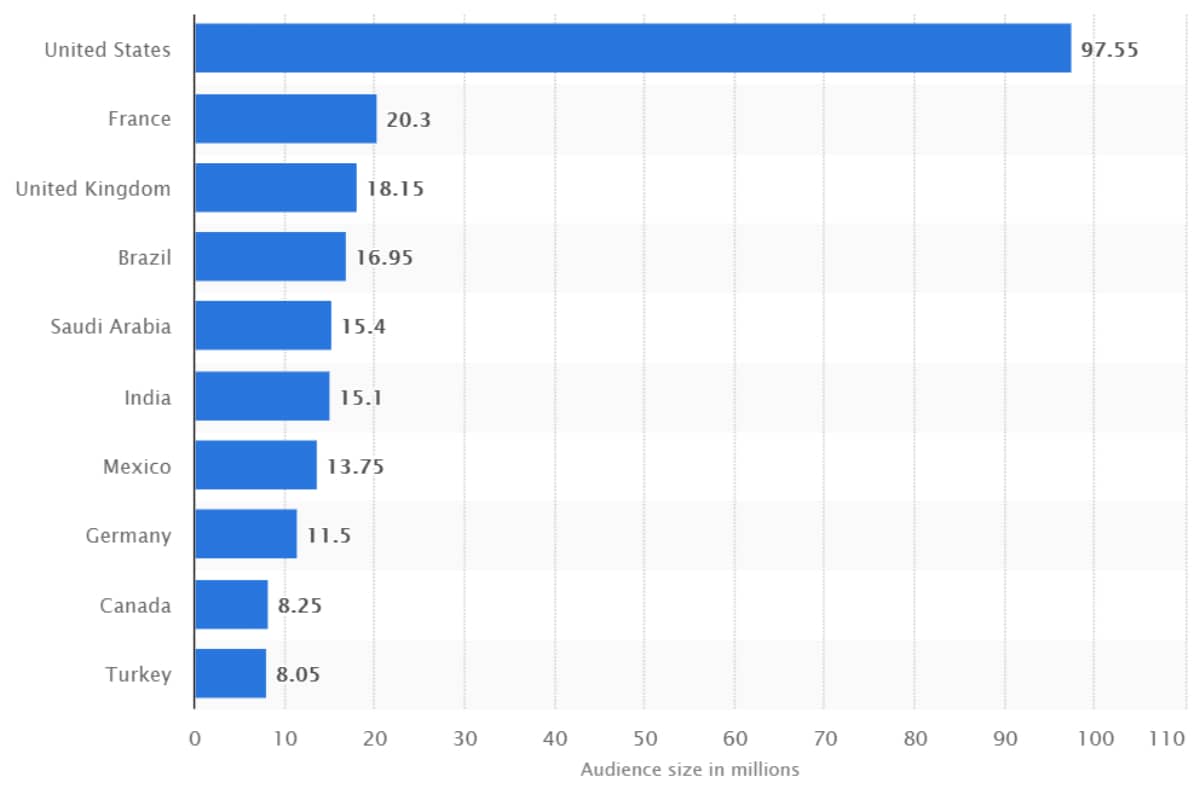 Countries with most Snapchat users as of July 2019
Photo Credit: Statista

Snap in its latest earnings report posted that its daily active users rose to 203 million in the second quarter ended June 30 from 190 million in the previous quarter. However, the company doesn't formally reveal any country-specific numbers.

Made for 'real friends'
To create further brand awareness and entice new users from growing markets like India, Snap last month launched its 'Real Friends' campaign under which it featured 70 Snapchatters from 12 different countries, including "several" from India. The multi-market global advertising campaign followed an integrated approach with billboards placed across different cities. The prime purpose of the campaign was to highlight Snapchat as the platform for real and close friends -- not acquaintances.

Grusd affirms that by offering a platform for friends, Snapchat comes as a distinct player in the market that is full of social media apps.

"Snapchat is created as an antidote to social media," he says. "We are not social media -- we are made for friends, to come together to hang out with friends. We think we are one of very few platforms in the world that actually are aspiring to achieve that goal. And everything we do from that product perspective is to ensure that our community uses our platform as a means for people who are friends with each other in real life to communicate and hang out with their friends."

By promoting as a platform specifically for friends, Snapchat indeed tries to move out of the arena that has matured players such as Instagram on one side and emerging apps like TikTok on the other. But Grusd points out that apart from the creative tools and features that make the app a perfect destination for friends, the app follows certain standards and requires processes to limit instances of inappropriate content circulation that often bring the likes of Instagram and TikTok in the limelight.

"One thing to know about Snapchat compared to many other content platforms is that our platform is not completely open," the executive says. "If you're a content provider and you want to provide content on to our feed, you have to go through a bunch of processes in order to ensure the content is of sufficient quality and comply with many policies to ensure that the content meets our standards in order to come on to our platform."

The team at Snap also spends plenty of time with content creators and partners to bring relevant, rich, and engaging content for users, he adds.

Snapchat Bets on Localisation, Opens Office in Mumbai to Expand India Base
Comment