Skype for Windows and Mac updated to version 6.0, brings Facebook and Microsoft integration

Users will also be able to instant message with contacts from Windows Live Messenger, Hotmail and Outlook.com. Eventually, Microsoft is expected to roll out voice and video calls for Microsoft network contacts as well, something it says will arrive "in coming weeks."

While some may feel that having multiple accounts to sign into one application can be quite a task, but it isn't so. You will be prompted  to merge your existing Skype account with your Facebook profile. The same applies when logging in with your Microsoft accounts. It's worth updating for the simple reason that you can now message all your contacts from one application. 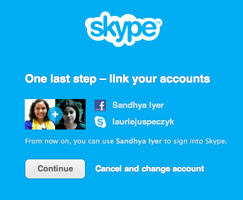 Microsoft acquired Skype last year for $8.5 billion. Since then, the two companies have been working closely to bring updates and changes to the video calling application. Microsoft is set to launch its latest Windows 8 OS on October 26.
Comments